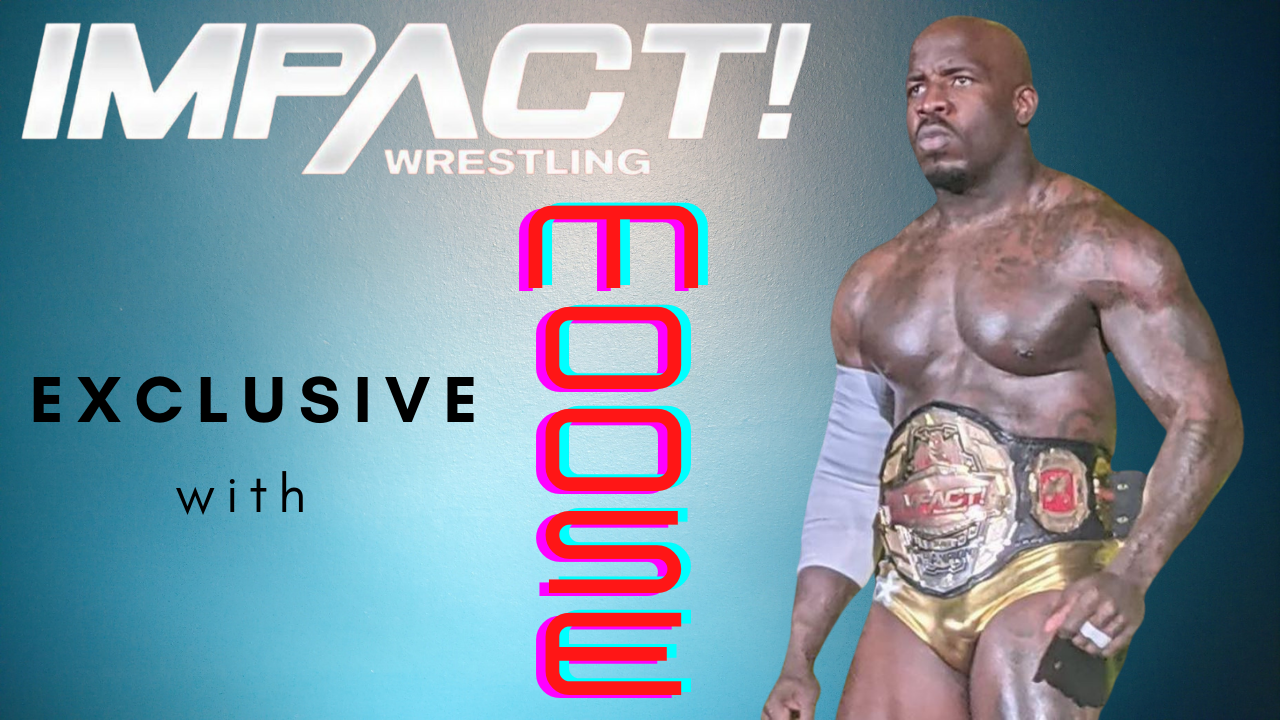 As many of you know who follow me or Reel Talker, I’m a huge wrestling fan! You will notice previous interviews and posts about WWE or AEW, but those aren’t the only two games in town. IMPACT Wrestling has been around for a while and is also a mainstream wrestling company with a ton of big name talent. One of the premiere talents and stars of IMPACT is “Moose”.

I had a chance to chat with the former IMPACT champ about working for IMPACT, why he chose to resign with them, his NFL career, plus Marvel and DC.

Moose was very laid back and chill. His on-screen persona is a lot more intense, so it was an interesting parallel, to get to see a wrestler in his everyday life versus the intense persona in the ring. So we immediately established that Moose prefers to be called by his ring name instead of his real name which is Quinn. That’s something I noticed from speaking to wrestlers that they prefer to be called by their wrestling names, probably since that’s what majority of the public knows them as.

Moose spoke about his reason for resigning with IMPACT and it definitely seemed like he likes the leadership of executive Scott D’Amore. He also seems very high on the current roster and management of the company, in addition to the potential prospects of big name talent moving over from other wrestling companies. I like the fact he resigned with IMPACT and is staying loyal with the company that he had his big breakout with. He’s a foundational piece of IMPACT.

Little did I know that Moose is a big comic book fan. We got into a fun discussion about the recent Doctor Strange and The Batman movies. He made a great point about Scarlet Witch, which (no pun intended) only a true hardcore fan of comics would know and notice.

I was surprised to hear that he doesn’t follow the NFL much. Especially after almost playing nearly a decade in the league. He’s clearly focused on wrestling all the way.

One thing I definitely noticed about Moose is that he doesn’t like to compare things, in this case Marvel vs DC and likes the idea of keeping things seperate and original. I agree with that. He also isn’t a fan of dream matches, which I found both surprising and kinda refreshing. Living in the moment and doing your work is underrated actually.

I think as the interview went on he opened up more, which was cool to see. We ended on a fun note with the book of useless facts. That always gets a positive reaction from my guests. Overall, it was cool to talk with Moose, he’s a heck of a talent and I’m excited to see what the future holds for him at IMPACT.

Check out where you can watch and attend upcoming IMPACT shows

One thought on “IMPACT Wrestling Star “Moose” on Staying with IMPACT, Dream Matches and Marvel vs DC!”

Next post MONTANA STORY Filmmakers on Why They Picked Montana