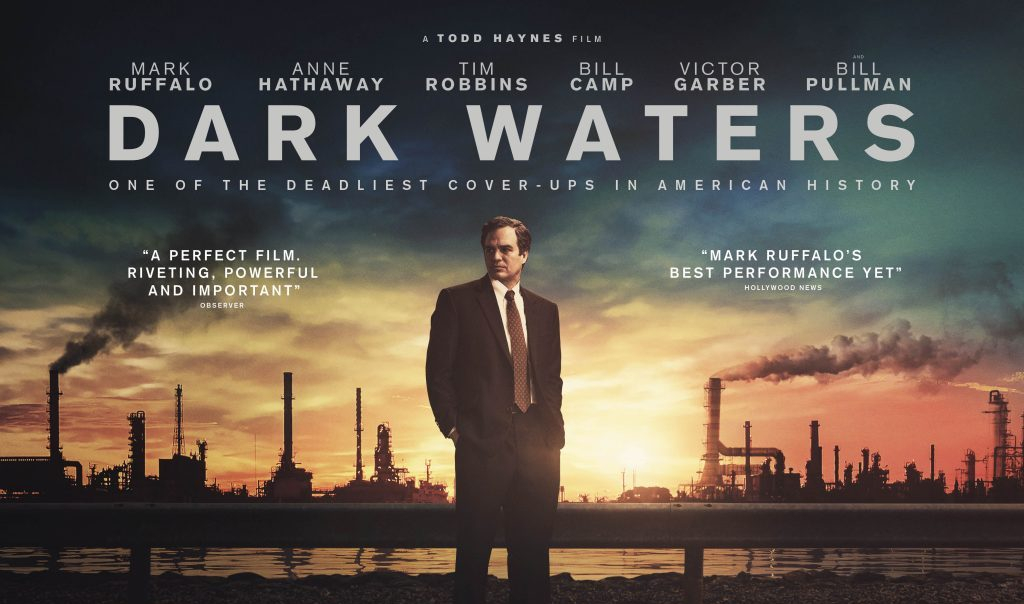 A buzzed about movie with an all-star cast. Another corporate monster bullying the little guys, in this case the local people. Does this dark tale of real consequences deliver a story that’s worth investing into and seeing? Find out if Dark Waters is the movie you can’t miss out on.

Big business taking over a town and running it down. Sounds like a fairly commonly heard story, unfortunately. In this case the big business is chemical manufacturer DuPont. Enter corporate defense attorney Rob Bilott (Mark Ruffalo) who goes from defense attorney to being a corporate nemesis as he takes on a lawsuit against them.

Quite the change of events. It’s a battle of one man going against a giant with endless resources and a vault full of hidden secrets. With the secrets being disastrous pollution and contamination that’s destroying the lives of people and animals.

This movie depicts a true story based on factual documents and cases. It was derived from Nathaniel Rich’s New York Times article “The Lawyer Who Became DuPont’s Worst Nightmare”. DuPont is a company that’s created hazardous chemically infused materials that we use on a daily basis in our products. It’s been noted that majority of the population of humans has those DuPont created substances in their bodies. Scary stuff.

The script is long-winded. Slow. Feels too long. If you’re expecting any sort of action, you’ve got the wrong movie. I did find myself getting bored watching, even though the content and story is very significant. It felt that director Todd Haynes focused on delivering the context instead of any sort of cinematic energy.

Ruffalo is fantastic, as he usually is. He understands how to create dramatic moments, just with his facial expressions. He doesn’t even need to use a tone of voice to amplify the dire significance of a scene, needless to say, he does this frequently in this movie. It’s a subtle, yet highly effective performance.

When Anne Hathaway, Bill Pullman and and Tim Robbins are your supporting stars, then you certainly know you have a heck of a quality group of actors on your project. Pullman and Robbins get the job done respectively.

I didn’t come away impressed by Hathaway though. Majority of the time she’s spot-on, but in this case she seems to try too hard and overact. She plays Bilott’s wife Sarah, but whenever she appears in a scene she’s trying too hard to get an emotional rise from everything. Underwhelming performance from Hathaway.

I didn’t find this movie entertaining at all. It’s very relevant and informative in content, but in terms of entertainment and enjoyment, it’s not. It’s brooding. Even the cinematography is drury and dark to reflect the nature of the story, but that’s sort of depressing to watch.

I felt the movie moved at a snail’s pace, even the big moments with plot reveals didn’t feel as grand as they should. This movie might have been much better served as a documentary. It’s unfortunate that something as critical as this story depicts can’t find much room to garner attention and pull.

I’ll only say yes due to the importance of this story. Companies like DuPont have a direct effect on our daily lives and livelihood. Especially for folks in smaller towns who rely on agriculture as their means of living. It’s startling to watch dead animals and the characters talking about the loss they are enduring. It’s powerful, but as I said the dullness of the film doesn’t help it connect with the power of it.

Dark Waters is not uplifting at all, but hopefully it educates you on conducting your own personal research on the subject matter and sharing it with others. I felt gutted and drained after it. It’s worth acknowledging Rob Bilott as a hero through his tireless case against DuPont. The movie also highlights the importance of being informed of your surroundings and the way big business covers up crimes and gets away with it. Dark Water isn’t fulfilling, but it’s vital to your knowledge.