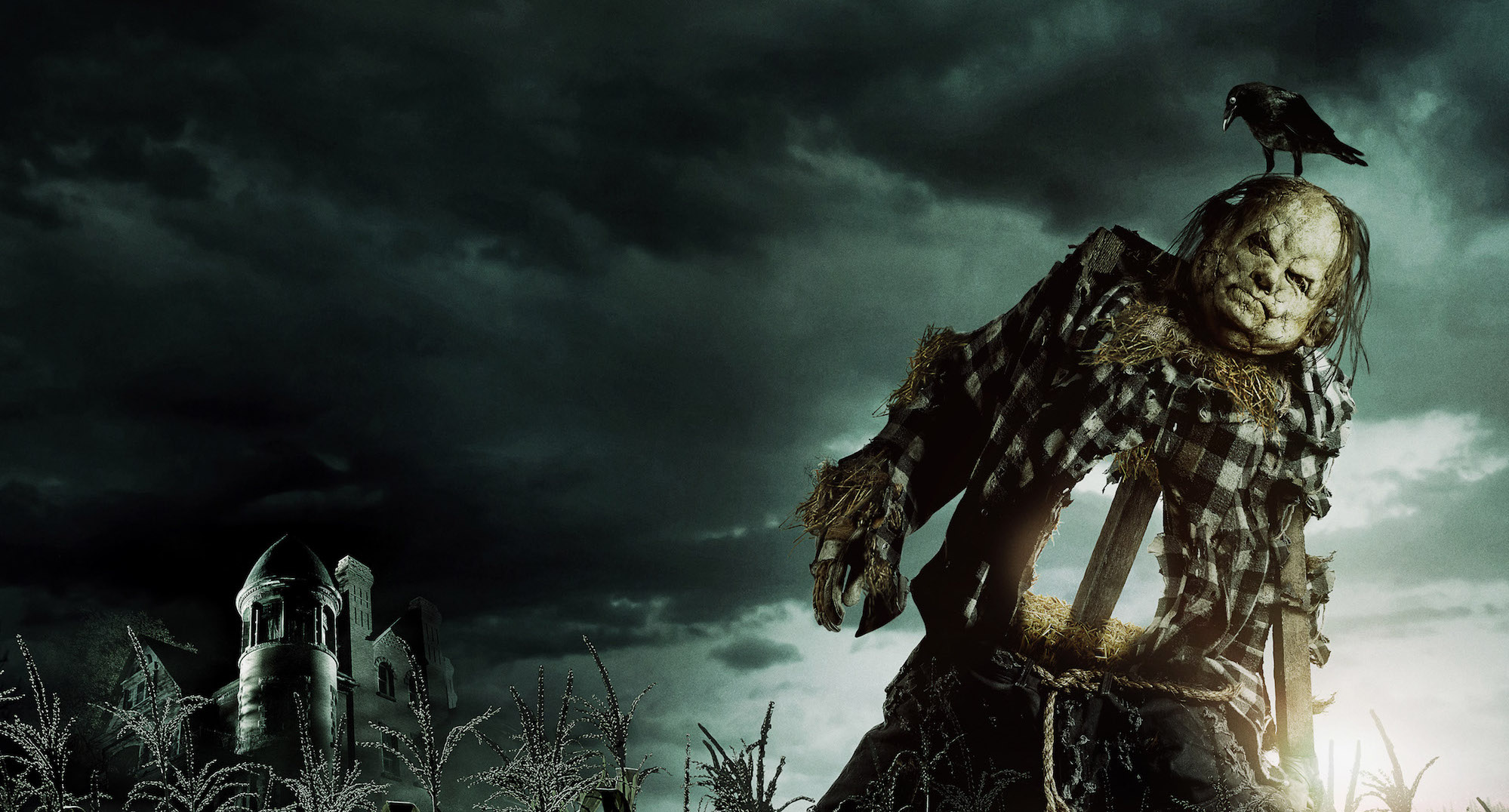 Are there ever any good stories to tell in the dark? The dark is usually scary enough. Guillermo del Toro likes his movie monster stories, but does this del Toro production fall short of his previous successes? Is this a story that will instill fear in a dark theater? Read further to find out.

A group of kids. That seems to be the way to go these days when it comes to casting horror movie ensemble. Gone are the days of teens and young adults. Thanks to Stranger Things. The story takes place in the late 60’s, when a group of friends discover a book they shouldn’t have messed with at an old abandoned house. Quickly they discover that the book begins to write their individual stories (deaths).

Each of them gets a specific death story, reminiscent of Final Destination movies. The kids try to bond together to uncover the mystery of the figure responsible for these stories, Sarah Bellows. Not to be confused with Sara Bareilles, a far better singer than Bellows is a movie character.

This is mostly a unknown cast of young actors. The leads are played by Zoe Margaret Colletti (Stella) and Michael Garza (Ramon). Gabriel Rush (Auggie) is also part of the kid crew. Rush is a talented actor, but he’s certainly not having a good August run with this film and The Kitchen, which he also appears in. Another young actor, Austin Zajur, is part of the friend group, but his character is so over-the-top it appears like he’s on a constant intense sugar rush.

Overall, the actors seem to do their best, but it’s the script that doesn’t give them any chance to shine.

This is my favorite portion to breakdown. While del Toro is attached to the project as a producer and one of the screenwriters, it’s Andre Ovredal who directs it. I can’t imagine this being either or their better work. Ovredal’s previous film included a far more entertaining thriller, The Autopsy of Jane Doe. Meanwhile, del Toro was busy collecting awards and an Oscar last time he was attached to a big name project. This would be like winning the Super Bowl and missing the playoffs the following year. In other words, a very bad follow-up.

What makes this script fall flat is that it tries hard to be something it is not. It clearly was aiming to be a blend of Stranger Things and IT. It’s not even close to either. Sure, Stranger Things has laid a hard precedent to measure up to, but someone of del Toros resume should be much better than this.

The monsters, which del Toro is synonymous with are atrociously put together in Scary Stories. They aren’t scary at all, rather look awkwardly disfigured and disjointed, as if someone greenlit on them while they were in the middle of being constructed. A monster should warrant some sort of a reaction, but these monsters just make you confused and disappointed in what you’re seeing.

All did not fail. The set design does look nice and timely. The era is defined nicely, with cars and clothes that fit for the late 60’s time period. The haunted abandoned house looks fairly elaborate and daunting.

Any of the positives are overshadowed by the lack of any realism. The kids seem to be the only ones aware or living in this small town of Mill Valley. Chaos ensues around them and there seemingly doesn’t seem to be anyone around to witness any of this, aside from a recurring corny cop who does at least provide some laughter in the more prominent scene he’s involved in.

This movie is not scary or entertaining. It seems like it tries too hard, but then the final product looks unpolished. The script is coherent, but corny dialogue and lack of commitment to an identity derails it from being any good.

The lack of identity stems largely in not having a clear idea if the film was adult centric or intended for teens? Judging by some of the bloody violent scenes it seems like it would lean towards the adult audience, however the story offers little tension or fear factor.

I wouldn’t waste money on a movie ticket to see this. The main appeal would be to see it if you were a fan of the books. None of these “stories” in the movie are scary, but rather rushed and not developed, instead. Maybe kids would find it appealing, but it’s too violent. Adults should get a few laughs and chuckles (not intended).

This is one of the more disappointing movies of the year. Scary Stories to Tell in the Dark is a story that shouldn’t have been told on screen the way this one was.

Next post Nikki Bella and Artem: Share Their Favorite Activity Together, Her Return To The Ring and Nikki’s Nightly Bedtime Routine