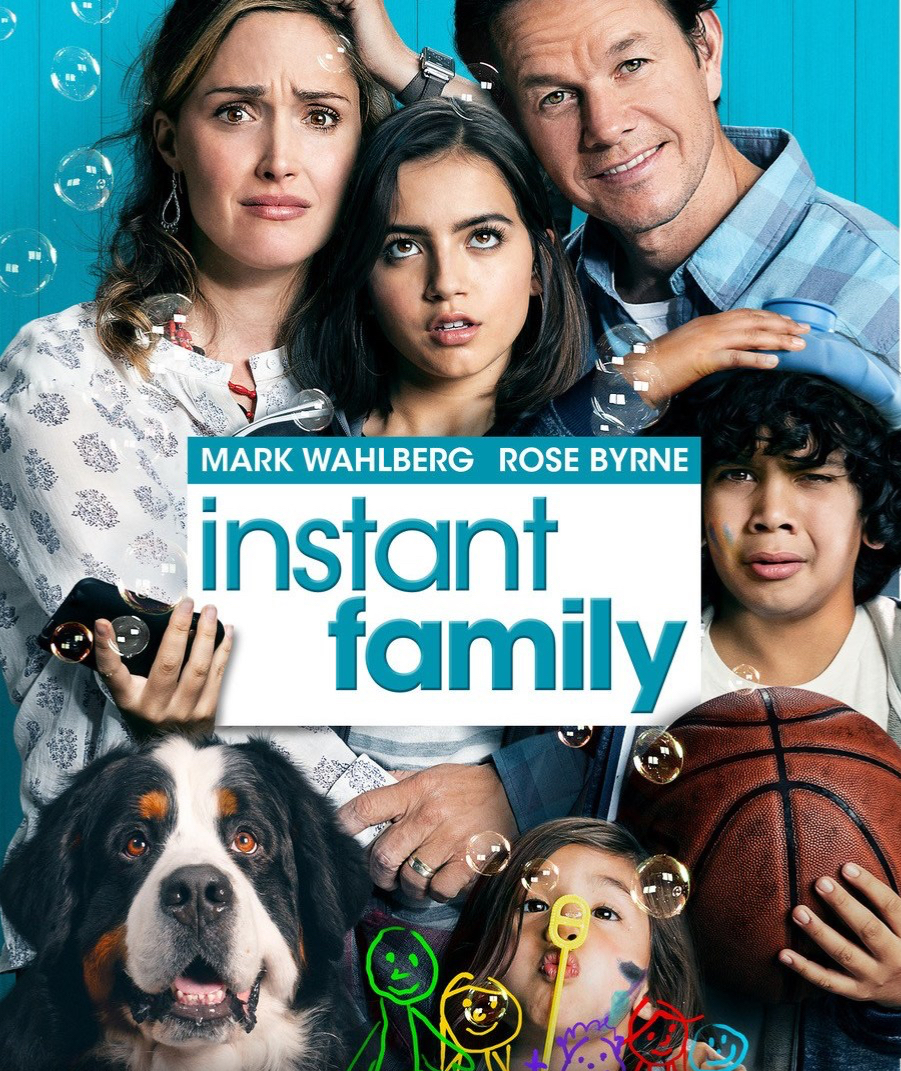 Shout out to all you parents out there. In Instant Family, Mark Wahlberg and Rose Byrne go from zero kids to a house full of them. The story inspired by true events is both humorous and heartfelt. Now find out why it will win you over.

Pete and Ellie Wagner are a married couple that are looking to fill a void in their lives. That void leads them to a foster care center. At first, the couple is hesitant to bring children into their lives, until they come across Lizzie, Juan and Lita. You know what happens next, they are adopted, but the siblings are a handful to deal with for the new parents.

With no previous experience with children, the Wagners must learn to raise a teenager along with her two younger siblings and provide them with a home they never had. The new family must go through chaos before they can fully bond and become a family unit.

The real-life story, along with the movie addresses cultural differences and bridging the gap between them. The Wagner’sare a Caucasian couple, but the kids are Latino, in the film the Wagner’s are not only adjusting to becoming parents for the first time, but also trying to learn the background and culture of the kids. There is a powerful message in that. Growing up with different backgrounds, customs and culture doesn’t mean you can’t embrace and combine that with someone who had a different experience.

Wahlberg and Byrne are a fantastic duo. They have great comedic timing individually and together. They play a fun erratic couple. Relatable in many ways for their imperfections and transparency.

Isabela Moner steals the show as Lizzie. She’s the glue and the bridge between the parents and children in the movie. Couldn’t play a teenager any better. Lizzie’s inner struggles of her childhood, playing parent to her younger siblings, trying to discover herself as a teenager and learning to trust someone to show her love and commitment. That’s a lot to depict, yet Moner does it flawlessly.

Gustavo Quiroz and Julianna Gamiz play the two other siblings. They are both charming and spunky. Octavia Spencer plays a social worker named Karon and Margo Martingale plays grandma Sandy. Good work and interesting characters from both of those ladies.

I certainly found this movie to be fun and entertaining. It has a lot of heart mixed in with comedy. This film is inspired by a true story, so the story is very much real and relatable to people.

The cast had chemistry and fun on-screen, so translates to  viewer. This is a good family movie and a movie you can see with friends or a date.

Not only is this an entertaining and fun, but it’s a movie that sheds light on societal matters. Topics of culture, ethnic backgrounds and foster care are depicted. It intervenes humor with the importance of foster care and the issues facing it. These are subject matters that don’t affect everyone directly, but it’s important to be aware of and contribute if possible. If this impacts even one person in a positive way, then the movie accomplishes a whole lot more meaning then by just providing some laughs.

Sure, there are some over-the-top scenes that play up the laughs, but movies of this genre often times don’t deliver the message and payoff that Instant Family does. Combine reality with humor and significant societal elements and you’ve got yourself a quality movie.

o   Mr. and Mrs. Fix-It—Behind the scenes with Mark Wahlberg and Rose Byrne

o   The Families Behind the Fair—Hear from real foster families

o   The Anders Family—The real-life inspiration for the film

There is a lot of bonus content that’s part of this Blu-ray.  The gag reel is fun feature, but my favorite was “Ths Families Behind the Fair”, which has real foster families sharing their stories. It’s cool and touching.