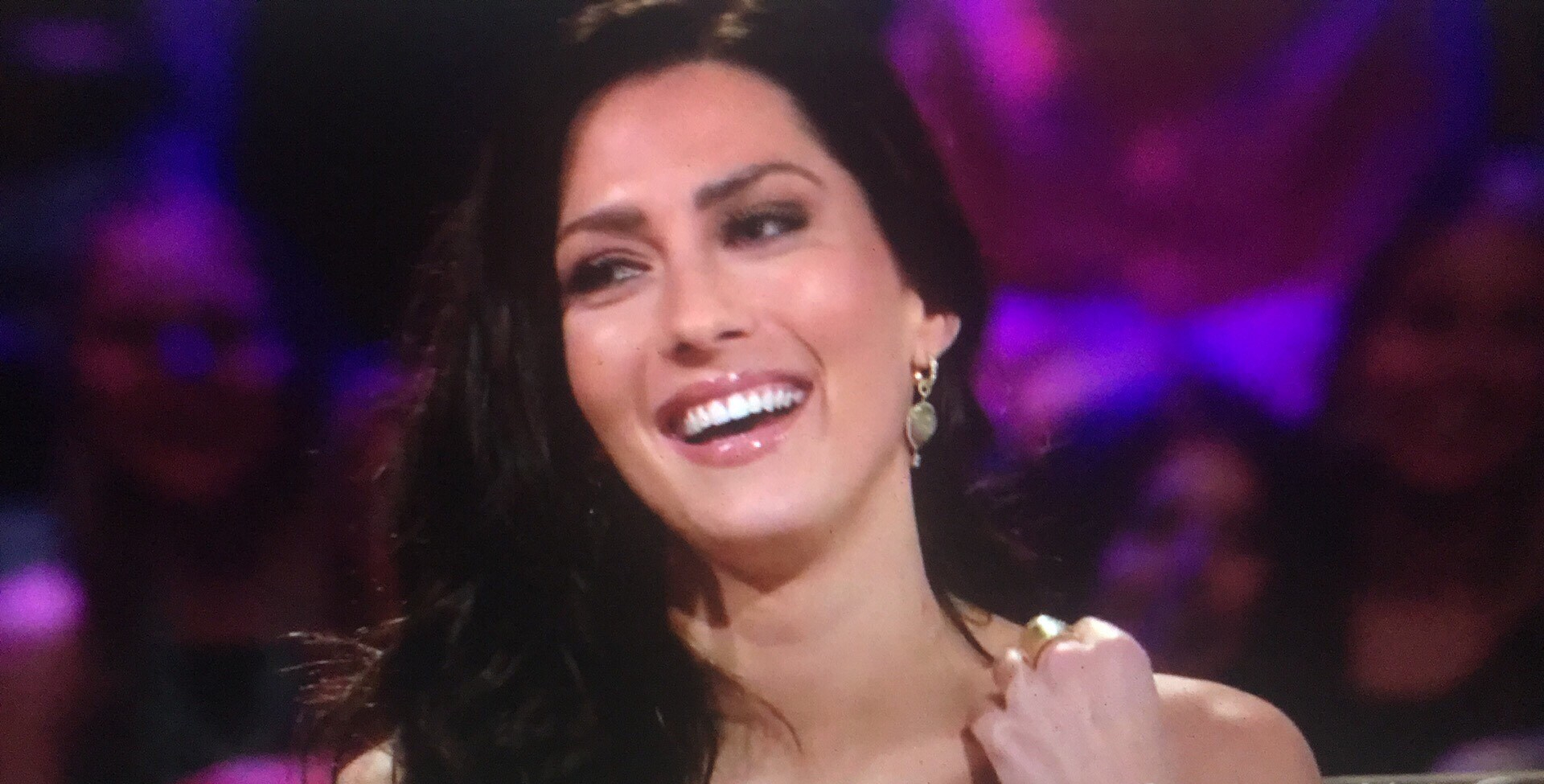 The live studio show with Chris Harrison making a customary appearance and making the assumption that America couldn’t sleep after the events of the previous night. I slept well, thank you very much. Of course Harrison forces us to re-watch the events of the finale, again. We get to see some new footage of Becca traveling and going through the airport, hiding her face under a hat, as if she’s ducking paparazzi. Compelling stuff.

Meanwhile, we see Arie seeking advice from Jason Mesnick. Probably the right person to talk to after he had a similar fiasco happen to him. Arie heeds the advice and heads to Virginia to get back Lauren. As he arrives at her house he gets a panic attack. Been there myself, that’s no fun.

The producer asks Becca if she still loves Arie, she says, “Yeah” and proceeds to erupt with tears.

After the break, after Harrison reminds us that we left off with Arie in the midst of a panic attack, we get back to Becca. She is sitting on her bed and torturing herself by watching videos of her and Arie together.

Arie finally goes up to the door, knocks, like a torpedo, Lauren jumps into his arms. What if it was the mailman or delivery person? Would she jet into their arms also? Is Lauren’s household that friendly?

Lauren reveals her struggles post-elimination. Then she asks him about his connection with Becca. He walks around it and says that he was scared away by Lauren’s doubt. He then follows up by saying he picked Becca because she felt safe.

When Lauren asks Arie if he thinks he’s over Becca, he lets out the biggest grin and says he’s over her 1000%. The visuals don’t lie. He proclaims his love for her and says that he wants her back. She accepts immediately. Well, that was easy.

The Band of Bachelor Women

After the break, Arie’s runner-up crew joins Harrison in studio. Sienne, Tia, Bekah M., Kendall and the new spokesperson of the group Caroline.

Bekah shoots off on Arie calling him a “manipulative person”.

Harrison asks them about whether they should have aired the breakup. The women are split on that, Bekah didn’t they they should have. Yeah, like the production was gonna listen to their input, when creating buzz and ratings are at stake.

Tia reveals that she was with Lauren on NYE when Arie reached out to her on social media. Do these people even share phone numbers or is everything done by sliding into DM’s these days?

Bekah keeps firing at Arie hoping that Lauren gets out of that. Looks like he made a good choice for him, because had he picked Bekah, he would have been completely on the mend.

After the break Becca is there to talk to Harrison. Becca talks about the difficulty of watching back the breakup, but it helped her get closure.

She says she’s doing okay and has gotten lots of closure watching it back and never wanted for him to feel trapped being with her.

Harrison reveals that there have been billboards in Minnesota and California for her. A fund me account that’s raised 6K in support of her. She seems blown away and tells them she’d like the money to be donated to Stand Up for Cancer charity. The show is matching the donation. At least something nice is coming out of it.

As they head to break, Harrison asks Becca if she is willing to face Arie. She agrees to it.

The time has come for Arie to face the music, aka Becca. They hug. She asks him when did he know that he wanted to pursue Lauren. He says that it was after the phone call with her.

He says he wanted to cameras and everyone to see it, because he wanted it all to fall on him, not her. Becca wants to know why he didn’t tell her sooner, but he says he was sorting out his thoughts. Also known as making sure he’s safe and not risking it all for nothing.

Harrison interjects and asks Becca where she stands now. She says that she’s ready for the next chapter in her life and will always have love for Arie.

Arie’s regret was proposing to Becca. He felt the pressure of the show and the lack of time forced him to do something he wasn’t ready for. Hard to argue that fact. It keeps on getting overlooked how unnatural it is to force a proposal as the show does.

Becca says that he robbed her of a first engagement and proposal. He profusely attempts to apologize and own up to his mistakes. Becca accepts Arie’s apology and wishes he treats Lauren right and doesn’t hurt her. She wishes him happiness. Classy move by a woman who has taken the high road throughout this process. The segment finally comes to an end. Arie looks shooken up and nervous.

For all the talk about Arie committing the crime of all Bachelor crimes, Jason Mesnick is up next with his wife Molly. Jason was Arie, before Arie. Jason picked Melissa Rycroft, only to propose to Molly right after.

They talk about how social media has such pull these days, something they didn’t have to deal with when they were on the show. His advice to Arie is to get away, literally, away from a big city to work on his relationship.

Jason is sticking up for Arie and vouching for what great of a person he is. He’d know better than most. He wants people to give him a chance. Harrison won’t be the one to do so apparently as he blows off that statement and turns to Molly to ask her about Lauren being the new version of her.

After the break, Arie is back. Harrison asks him why he did “this,” Arie says he did it for his fairy tale love. He’s right. He was The Bachelor. The show was supposed to center on his story and search for love, so as long as he’s ultimately happy, it worked, even if it took crazy turns and twists along the way.

Lauren finally comes out to join Arie. Harrison asks her about when she hear from Arie. She confirms what was already stated before, NYE. She says that Arie reached out through Instagram, of course, but that the only reason she decided to respond was due to a bit of curiosity she had. She wanted Becca to be aware that her and Arie are talking. She is aware now.

She says that she’s never ben more in love. She continues by saying that she loves how honest, brave and respectful he was.

Harrison seriously seems to have a issue with Arie. He asks Lauren if she trusts Arie. She says she wouldn’t be with him if she didn’t.

Arie said the risk he took was worth it and that people don’t understand the gravity of what he did.

Harrison wants Arie to address the haters, but Arie doesn’t care about the hate. He has his woman and he’s in love.

After another break, Harrison wants to know what’s next for the couple. They are heading out of the country. Mainly to get away from Harrison and his judgemental ways. Afterwards Lauren is moving to Arizona.

Insistently, Harrison wants to know how they will deal with the backlash. Arie and Lauren just want to focus on their relationship and not pay attention to outside noise.

Lauren reveals a little nugget of into when she says she was always hoping Arie would come back to her, but didn’t think it would happen.

At the end of the day both Lauren and Arie say the entire thing was worth it to them. Harrison utters the biggest lie of the season when he says he’s happy for both. This coming from a guy who always promises drama that never delivers. The past hour and half did absolutely nothing to make him seem anything but happy for Arie.

Arie has the final say. He proclaims his love and dedication to Lauren and gets on his knee. He proposes to her and she says “definitely”. Wonder if old pal Neil Lane contributed to this ring? Probably cost Arie a few home sales. They walk off the set to go greet their families in the audience, while Harrison begrudgingly claps his hands.

After the break, Harrison confirms the announcement of the Bachelorette will be made now. So the new Bachelorette is Becca! That was pretty obvious. They had a built-in reason. The crowd erupts in cheers. Bekah, Kendall, Sienne, Tia and Caroline cheer as if they got picked on The Price is Right.

Harrison says that it was one of the easiest selections they have had to make. She adds that it was an easy choice for her to accept.

He asks her what’s it mean to her to be The Bachelorette. She says she has big shoes to fill. Really? Rachel? Andi Dorfman? Kaitlyn? About a size 5 shoe to fill. Not hard to do that.

Harrison invites the girls from the show to come up on stage. They try to fit on that tiny couch. They all seems thrilled with the selection. Harrison calls them the most awkward couch ever, but Caroline refutes by saying “you’re awkward,” hahaha. Line of the night.

Harrison announces that Becca is about to meet some of the guys from her season. The same kind of awkward shtick they pulled when Rachel was named Bachelorette on the After the Final Rose.

After the break, the fake stage is set and here comes the first guy. First guy is so nervous he can’t seem to know what he’s even talking about, neither can Becca, especially with his thick British accent. This guy is uncomfortably lingering around.

The next guy almost rips off her arms by pulling them tightly and swinging them.

The following guy is out musician of the night, coming out with a banjo and singing awfully.

Darius comes out next and addresses her as “hey man,” which will most definitely leave a lasting impression on her.

Blake and Bradley come out next. Blake is the guy, but Bradley is the horse. Bradley is far more impressive at first glance. He walks her over and helps her get on the horse. Signifying some sort of innuendo. Harrison wraps things up by revealing that Becca will be back on May 28, as her season begins.

Here are some take aways from After the Final Rose:

Stay with The Bachelor Universe for more coverage in preparation for The Bachelorette. You can also follow me on Twitter @TheJimAlexander