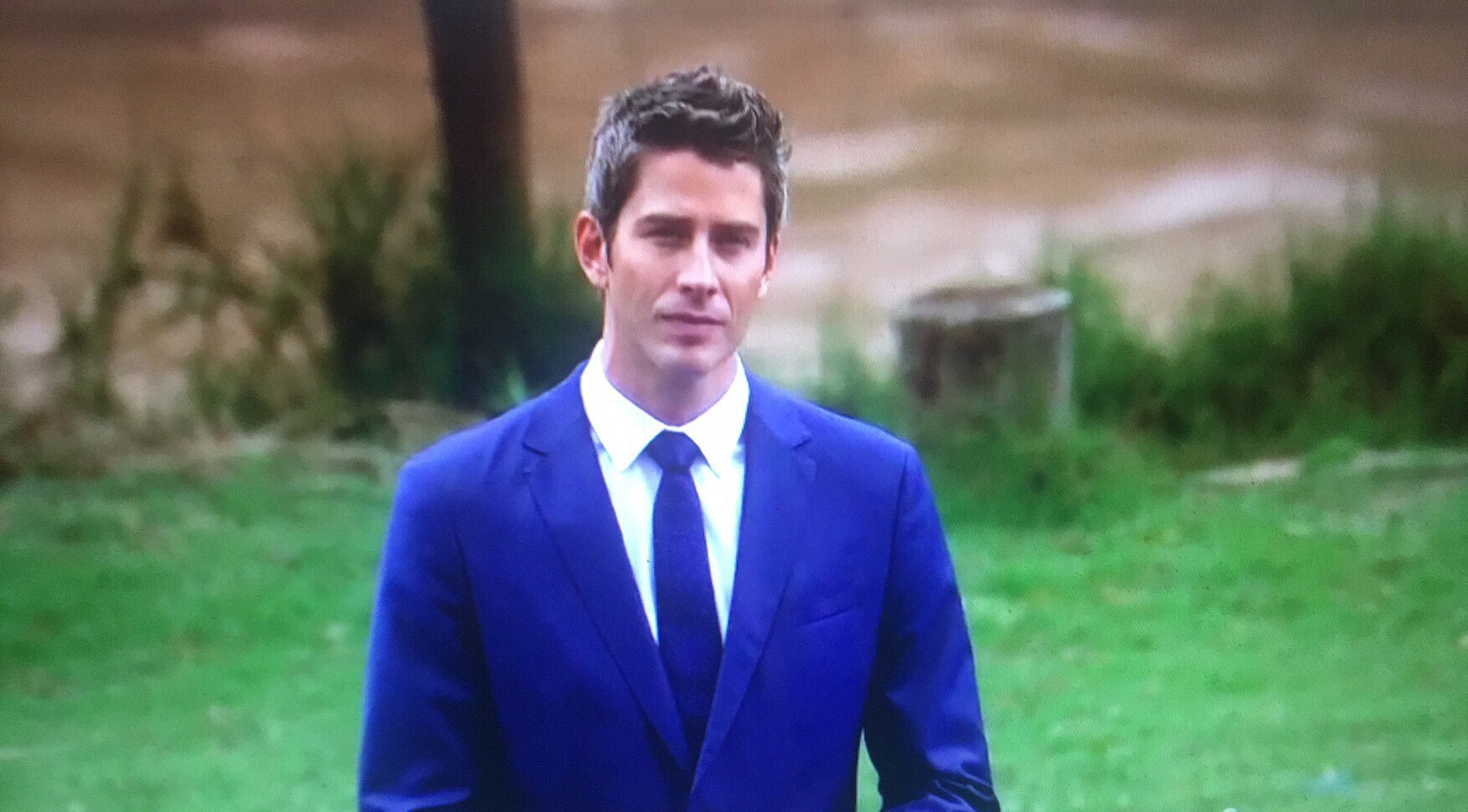 The Bachelor finale has finally arrived. It seemed like a long time coming. Chris Harrison comes out to a live studio audience. This is what they always do for the finale. Right away Harrison announces that Arie is about to be one of the most controversial Bachelors after this episode airs. Well, the spoilers have been out now for a week and spread like wildfire (I have managed to somehow keep away from them), so will it surprise anyone?

Off we go back to Peru. Arie is walking around reminiscing. Talking up Becca and Lauren and it probably won’t end up meaning anything in the end. Arie meets up with his family. His father reinforces to us what we already know, which is that his son is indeed crazy.

Lauren gets to visit his parents first. She reveals the obvious, that she’s not cool. A great bit of info is released when Arie’s sister-in-law tells Lauren that it’s always interesting around this family. Lauren, you’re about to get the full treatment of it. Like it or not.

The biggest mystery might be as to why Lauren keeps bobbing her head as she talks? Will this be explained, ever?

Overall, the family seemed decently impressed with Lauren being a “cool girl”. Even after she told them point blank that she’s NOT cool. Go figure.

Back to Cusco, Peru. Becca is up next to meet the fam. Becca is looking really stellar for the meet-the-parents outing. Classy and professional. Arie and Becca start out talking about how they fell in love with another. Arie’s mother seems to be settled in on Lauren though.

Arie’s dad seems to care about Lauren mainly, so he asks Becca about her. Insert face palm emoji. Arie’s father gives Becca the ultimate reassurance by telling her he’d be happy with either girl for Arie. Splendid. Somewhere uncle Gary is seething with his cane in hand and ready to use it.

According to Becca it’s like comparing apples to starfish. Which one is Lauren? The poisonous apple? Or the starfish? Either way, a comparison that leaves you more lost then you were before she said that.

Quick, get Becca a bucket. She’s about to vomit next time she hears the name Lauren mentioned.

Arie heads back to the family to get some final analysis of the women. Surprisingly the family is now all about Becca? They feel she’s a better fit for Arie and his father believes she’s the kinda girl who will give him the kick in the ass that he needs.

Before they head out to the commercial break. Caroline joins Harrison in studio. She reiterates that she doesn’t think that Arie knows what he wants. She’s still appalled by him.

Lauren gets her final date with Arie. Machu Picchu is the location. She’s so impressed, because she’s read about it in books at school. See, further validation she’s not cool and was studious.

Lauren makes sure to tell Arie how great it was to meet his family and he tells her how impressed he was by how comfortable she was. Here come the lies, galore. As Arie and Lauren are connecting, the elephant in the room has to be the shot of Arie’s chicken noodle legs. Not manshaming here, but give this man some more prop food!

The best question arises when he asks her how he sees their days looking like after the show. Lauren starts by describing them going to work, coming home together (do they work at a same job in her world?), have a glass of wine together (crucial). Then on the weekends “maybe” take the dogs to the part and see family. Sure hope she takes her dogs out more than “maybe” on the weekends. The first words of Arie’s response is “it’s funny”. Yes, you got that right Arie.

He does also add that he wants kids soon. Yeah, good luck with her, when she can’t even commit to taking the dogs out regularly.

Becca gets her last chance to impress. They meet on the streets of Cusco and wander around town under an umbrella, with random children bumping into them. Their date gets better when they get to hang out with some sheep and alpacas.

Arie can’t seem to focus because he can’t decide which woman he loves more.

Becca gets one thing right, she feels that Lauren is like most girls he’s dated before. They meet for a hotel chit-chat. Arie tells her he’s still conflicted. At least he’s being honest with her. This is when she presents him a rather meaningless note affirming her readiness to be committed to him. She even made a cute scrapbook for them. With a page left unfilled for their babies pics. Creepy Becca for you.

The Moment of Truth

Before another commercial break. Ben Higgins and Jason Mesnick share their thoughts on Arie’s looming decision and how their situation compared.

Bachelor favorite jeweler Neil Lane arrives with the rings for Arie to choose. This guy should be the next Bachelor.

The moment of truth has arrives, or one we think is. Stepping out of the first limo is Lauren. That’s usually a sign of doom for that person.

Lauren makes a passionate final plea and proclamation of her love for him. She talks about walls breaking down and loving him all along, but Arie is tipping us off at home by looking down and not at her. All she needs to do is look at him and stop talking. It’s over Lauren.

Finally, Arie speaks. He says he gave it thought all night and can’t give anymore to her. He gave her his all, but still he can’t find place for her in his life. Damn.

All she can say is that she wishes him the best. Not much more she could say.

She’s stunned and blindsided by him. Doesn’t understand how he hasn’t made a decision until this morning. Lauren rides off in the limo shocked. It’s happened every season when someone is sent home in the finale. No surprise yet.

Becca’s turn to see Arie. This should be good news, but we still have an hour left in the show. She gives her statement about how wrapped up in love she’s with him. Arie doesn’t purposely look away this time. He gets down on his knee and proposes to her. She accepts.

The happy couple celebrates. She accepts the ring and the rose. He asks her when are they making babies? Now, I have not seen a guy that quick to desire babies. Like he’s pushing it more than any girl that he was dating on the show. Chillax wannabe daddy Arie.

So it’s over, right? No it isn’t. Chris Harrison promises to show us uncut footage of something that happens that never happened on any reality TV show. Okay, sure Chris.

So Real the Drama Begins

We are now sent to the final day in Peru after Arie and Becca were pronounced as a happy Bachelor couple.

First we get to see iPhone footage of them swinging in a hammock and proclaiming their love to another and all of America. When Arie talks about the great time he has with Becca, he mentions thinking about Lauren and how would life be like with her.

Arie is convinced that he made a mistake and wants to risk it all for Lauren. He tells Chris Harrison about calling off the engagement with Becca.

Poor Becca, is arriving in LA for what she expects it to be a “happy couples” weekend. It’s about to be anything but happy for her. Becca is wildly impressed about how huge Arie’s ring is–—I know what you dirty minds were thinking there.

Becca anxiously await Arie as he walks up to see her.

Back to Harrison and the audience booing and gasping in disdain. Harrison doesn’t know what possibly the audience at home is going through? Well let me answer, nothing. It’s a show. Not life or death.

After the break, Harrison warns the audience that’s about to see the most emotional scene ever. Insert ten emoji eye rolls.

Arie and Becca meet. He comments on the size of her ring, which she won’t be wearing much longer. He keeps referring to their time together as “hanging out”. He tells Becca he doesn’t wanna be “half-in” with her and rather take a risk with Lauren.

Arie rather do it in person then on After the Final Rose. How noble of him. She begrudgingly tells him that she hopes that he finds what he wants, as it’s clearly not her. You are right about that Becca.

Lets go play-by-play on this. Becca retreats to the bathroom. Arie lurks by the door. He asks her if she wants him to stay. She doesn’t. He walks away. Arie walks out of the building, stands outside the door and looks down on his fingers. Apparently he forgot to trim his fingernails. Get this man a clipper.

Arie’s camera goes black momentarily. He follows back into the house. Supposedly nails freshly trimmed and all. He heads straight to the bedroom. Looks like he lost his wallet, or maybe he’s looking for her. During this whole time not even one damn producer offers to help navigate him through this maze of a vacation home. Looks like he finally may have used his Arie senses and located the crying sounds coming from the same bathroom he left her by.

Being the gentleman Bachelor that he is, he asks her if she’s doing okay?

“What are you still doing here?”

At least Becca dressed for the action with some very flattering jeans and a fashionable cute ocean blue top.

As she wildly scatters throughout the place, Arie makes the best decision of the night and plants himself on the empty couch.

Becca, “I have nothing to say”.

Well, maybe you’re not blonde and are quiet like a mouse, just as Arie prefers his women to be.

Production is laying an absolute egg in all this. Becca is damn nearly hyperventilating and they won’t even offer her an oxygen mask or anything. Unreal.

Arie wants to just talk “a little bit”. He proceeds to touch her shoulder…

He removes his hand quicker than getting burned by the oven.

Arie is impatiently trekking Becca and now just wants 2 seconds with her.

She obliges and manages to give him at least 2 minutes.

“I feel my future was ripped away”.

Not entirely Becca. Maybe you and Arie and Lauren can be a happy little family after all. Just compromise.

“I can’t imagine my life without you!”.

Start imagining it, because it’s reality.

At 50 minutes into this, Arie issues his first apology. Progress is being made.

“Well you finally saw me cry”.

That is true. Looks like Becca is turning a corner her.

Apparently that was a queue for Arie to slide off the couch a little and stare at her. It’s fine, if you’re into that sort of thing.

He finally says, “ok, I’m gonna go”, but he does anything but that. Still staring.

After a slew of teases and mild attempts, Arie gets up and walks out—FINALLY!

Becca rips off her mic and runs back to the bathroom. Shit just got real, folks.

Can we please get Montell Jordan in the house and queue up some “This is How We Do It”?

Back in the studio, Becca joins Harrison to share her thoughts on what happened. She hasn’t heard from Arie since. Harrison tells her that she will be seeing Arie tomorrow night in the special the network allowed to have. Nice cliffhanger. This long night is finally over.

(One of the more memorable Bachelor finales we’ve ever had)

Take aways from the finale of the show.