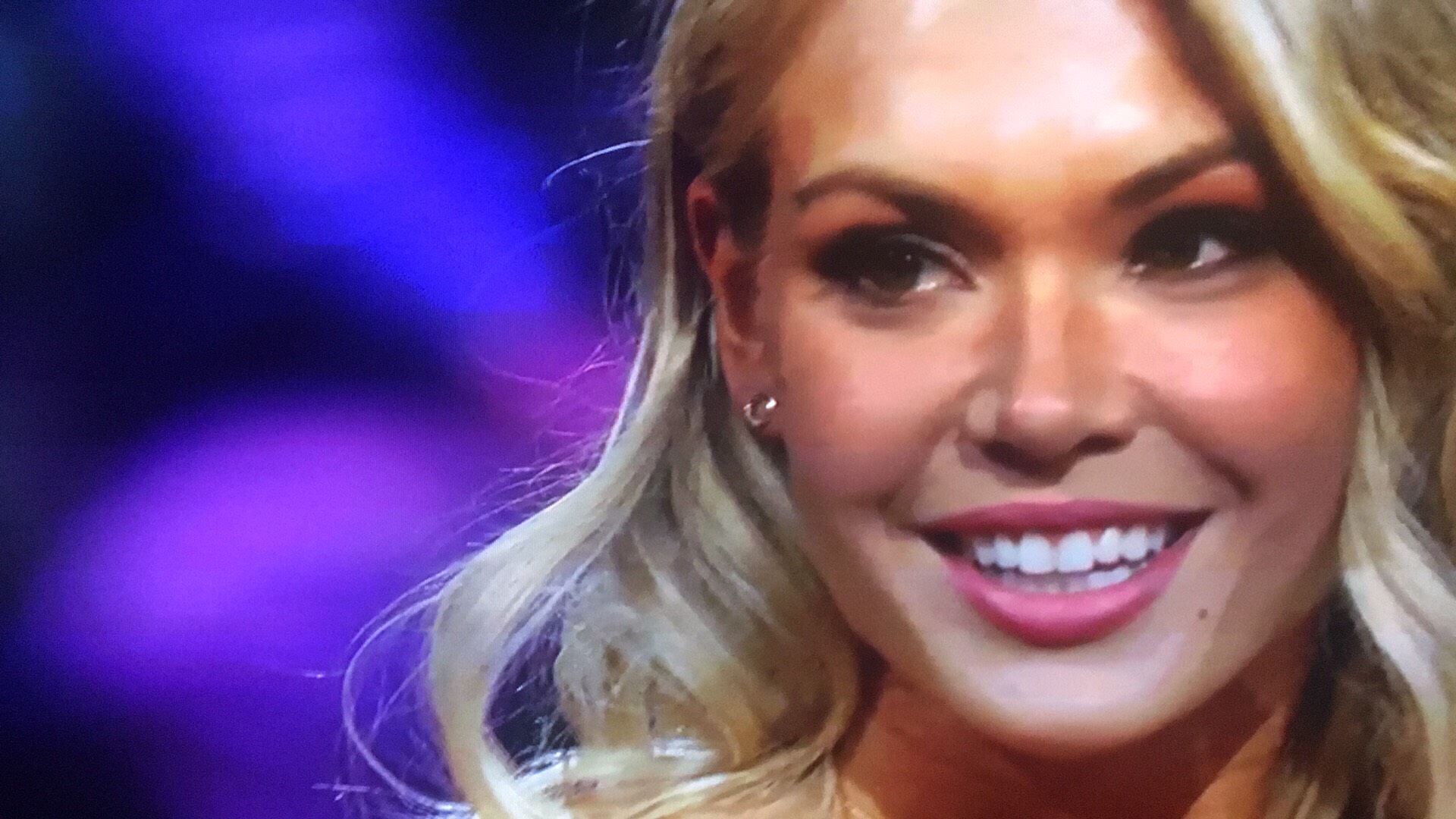 Just as Arie’s season is about to wind down, we get The Women Tell All episode. Chris Harrison previews all the drama that’s coming, but the most dramatic thing from the start seem to be the overly excited and odd studio audience members. Check out these two in particular. The bandit man and the hyped up woman.

The first order of business is the silly glam sham between Chelsie and Marikh. It’s stupid and just an attention grabbing topic.

The better feud between Tia and Bekah M. is touched on. Lauren S. sticks up for Bekah saying that as one of the oldest girls there at 31, she found Bekah to be mature. Oldest at 31? Geez, I feel ancient being 32 then, much less Arie at 36. Bekah comes on strong by pointing out to Tia that she has no right or idea about speaking of her readiness to love. Seems like a fair point Bakah is making.

Bakah isn’t sorry she was born in 1995. Wow, I actually remember 95′ as a elementary school kid in Poland wearing Power Ranger boxers to school believing they were shorts. Fact.

Kystal goes up on the hot seat. She gets immediate heat from Caroline, who is disgusted by the way she referred to all her cast mates in derogatory terms.

Bibiana tries to play therapist and tells her she needs to look within. Until the unknown Olivia (no idea who she is) brings up the topic of Krystal changing her voice. She does sound a lot different on the show than she is on the hot seat with Harrison. Krystal blows it off and attests her show voice to vocal chord stress.

Krystal changed the topic to mention that her homeless brother saw her on the show. How? Because of that he’s rejoined her family and is off the streets. Well that’s nice, but how does he have this intel and TV access? He had an option not to be on the streets to begin with? I wanna know way more about the story.

After the break Sienne gets a seat on the hot seat. Did I miss the memo that she was a fan and house favorite? She was so well put together, quiet and polite. She maintains her self awareness by explaining that she realized she was on borrowed time with Arie and wouldn’t make it till the end.

She also wonders why her education and accomplishments aren’t a bonus rather than an intimidation. Fair points, but when you’re dating a guy who couldn’t cut it at Pizza Hut, do you expect something else?

It’s time for Bekah to tell it all. Bekah brings up how she was unfairly judged for her age, bringing up the fact that there were many women there there were only a year or two older than her.

She talks about Arie’s attitude shifting after she revealed her age. Noting she felt him being insecure about his age, more than she was.

The big scandal about her going missing is brought up by Harrison. She talks about being on a weed farm in some mountains and sleeping in a tent. Surely, she was not missing but probably indulging in all that the farm was growing.

Harrison pulls out his phone and suggest Bekah call her mom to check in and let her know she’s safe in the studio. Probably less safe there than on that farm, then he lets the cat out of the bag and basically proclaims that she will be gone for the summer and partaking in Bachelor in Paradise. So there it is.

Finally there is Tia. She is pissed at herself for leaving it all out there. She wishes she could take it back. Ok, this after the fact desire to put up walls isn’t working. She was bothered he couldn’t give her an explanation. Tia confirms that she was in love with him and shocked she was sent home.

Harrison reveals that Arie came up to him after eliminating Tia and telling him that he was unsure if he made the right choice.

So they finally bring out Arie. Immediately Tia wants to know why she was sent home when he had doubts with Kendall. He explains that his connection with Kendall was farther along and his only question was if Kendall was ready. Basically, he just wasn’t that into you Tia.

Jacqueline feels it’s unfair that PhD issue was an obstacle. He claims it was a difference in life and he applauds her for being mature and pursuing her education.

Looking back Arie claims his heart was with Bekah and her age let him scare him off. He is very ready to settle down and he had a fair to move forward with her.

Caroline throws shade at Arie. She brings up something about what he did and how horrible it was. Apparently it has something to do with the remaining three women. Arie just answered by saying things will play out in the coming days. Uh ohh, now that’s a tidbit.

Krystal comes back on the couch, this time with Arie. Apparently Caroline’s shade was enough for him to take out his frustrations on Krystal. He was cold and snappy with her. Telling him how he should have had sent her home earlier had he seen and heard all that he found out watching back the show.

After the break we have bloopers. Arie quirks. Arie’s flat ass. Bibiana eating.

John Cena joins the couch along with Leslie Mann and their co-star from the upcoming movie Blockers. A trailer for the movie airs that’s followed by Bachelor blocking attempt moments. At this point they are buying time and trying to fill it desperately.

A preview for the next two episodes airs and the show comes to a close.

(One of the better Tell All episodes)

Some take aways from the Women Tell All:

Previous post Must See Movie Releases of the Week (Feb. 20)