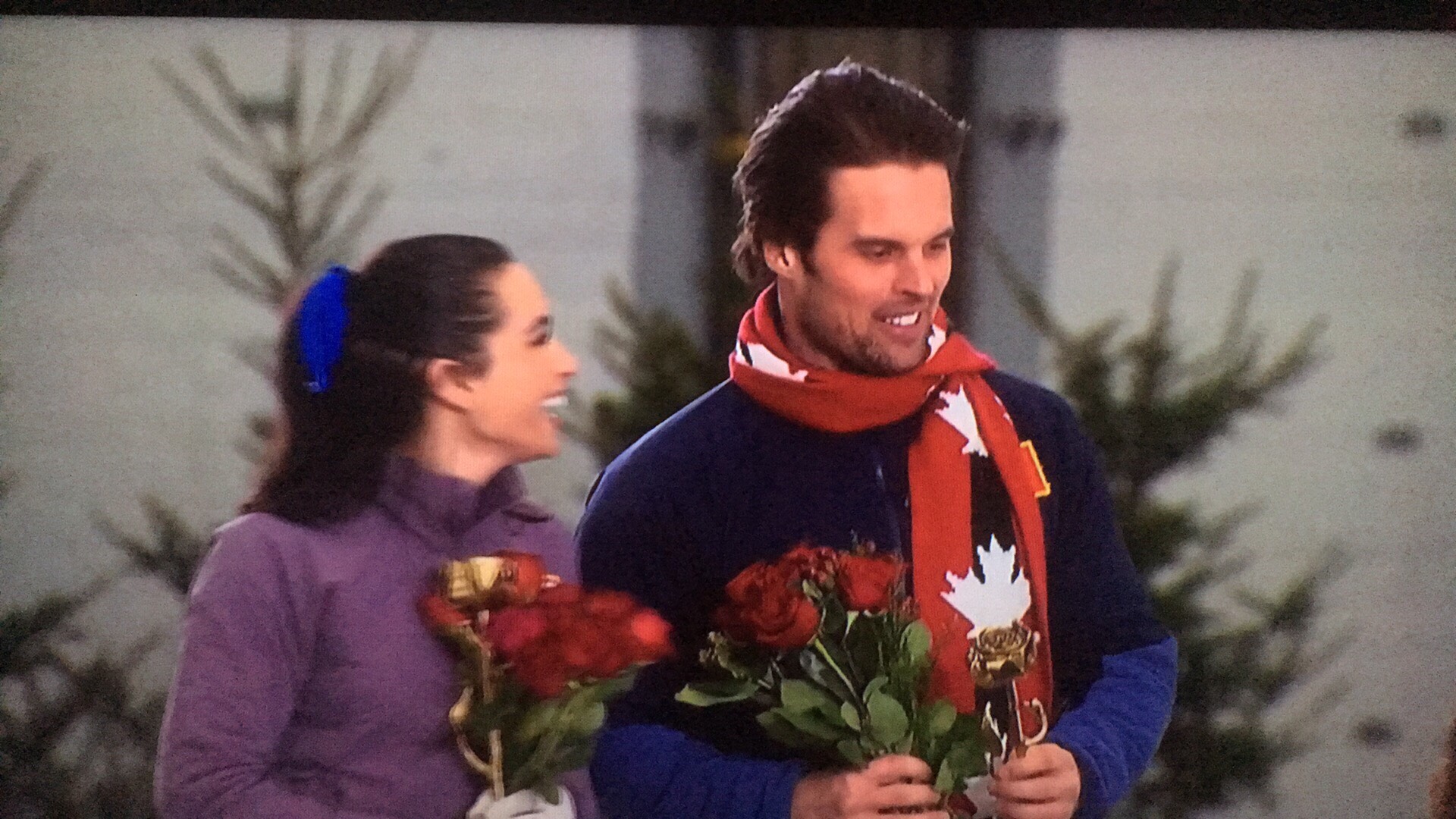 The final week (episode) of Winter Games has arrived. Chris Harrison plows through the snow to inform everyone that it’s not about games, it’s about relationships. Oh great, so what was the entire point of this show and the theatrics pretending it’s some Olympics event?

First the couples have to practice dancing. In preparing of their ice skating event. Coach Bibiana isn’t thrilled with Jordan’s moves.

Lily and Courtney decide to be crazy and do snow angels and run back into the hot tub to soak up. That’s how you get pneumonia folks.

The guy who was dogged for flipping a coin (Jordan) appears to be the most mature person in the house by having a convo Bibiana about their future after the show and wanting to make it work together.

Bibiana can’t handle the heat so she runs off to fold clothes, while Jordan does some therapeutic dish washing. Now I’m convinced these two would be great living together in a sparkling clean home.

After they finish cleaning they have another chat and Bibiana decides she’s not ready to pursue a relationship and decides to go home. It’s goodbye for both of them. No kiwi romance.

Time to by trained by some figure skating experts. Nancy Kerrigan is one the celebrity coaches. Somewhere Tonya Harding is lurking, I’m certain. This is going to be a tough group to make look presentable.

A winded Chris Harrison arrives at the house after practice to tell the remaining couples they all will have a one on one with a fantasy suite option.

Dean and Lesley make their relationship official, boyfriend and girlfriend.

Luke and Stassi talk about their future. She feels stressed and uncomfortable about the pressure of the overnight suite. They will not be spending an overnight together.

Lily and Courtney seem to be the strongest and most comfortable couple. Courtney tells her that he’s falling in love with her. These two genuinely look like they are falling in love.

Then there is Ashley I. and Kevin. He’s jealous of her virginity and tells her her first time will be great. Yeah, because he’s hoping it’s with him. She accepts the fantasy suite with Kevin.

Lily is getting a rough wake-up when Courtney starts pelting snowballs at her window.

Dean and Lesley make breakfast. I wouldn’t touch any food he makes.

Ashley doesn’t want to reveal whether she had sex with Kevin. Calling her night with him “incredible”. Ok, she must have had sex then.

It’s showtime. Final event. Hannah Storm has never seen or felt anything as electric as the atmosphere in Manchester, Vermont ice skating rink. Yup, here career is sadly indeed over.

Hannah is impressed that Luke is able to handle anything thrown at him, including Stassi. Insert face palm emoji.

Time to rise for the Bachelor anthem. Are they still rolling out this farce? Another low point.

Dean and his eyeliner makeup plus Lesley get things started. It’s not terrible, so that’s a positive, even though they don’t do any skating.

Naive Courtney actually is taking this seriously and thinks this is a big deal, it’s not.

Stassi and Luke did fine. She ended it with doing the splits, so there is something.

Ashley I. and Kevin have a choreographed shtick. He lifts her at one point. They do look connected to another.

So the winner of this competition wins the entire Winter Games? Did none of those other competitions count?

In a nail biting moment full of tension, Ashley I. and Kevin are crowned winners of Winter Games. Amazing. Everyone is a winner.

Where can I download the Bachelor Winter Games Anthem?

(Lack of intrigue, aka predictable)

Jordan and Bibiana are done, he wishes she finds love.

Ally still feels bad for Josiah having to kiss her after the puked.

Yuki is saying a bunch of stuff nobody is understanding. She’s still  fun.

Lily and Courtney are invited to the couch to talk to Chris Harrison about their experience. They rented an RV and traveled America together and decided to move to LA together.

Dean and Lesley are up next. They talk each other up. Proclaim their love for each other. Dean gets on his knee and offers—a key to his house. Air went out in the studio.

Then there is Stassi and Luke. The connection that started at the heart. Apparently Luke doesn’t have much heart as we find out from Stassi that he dropped her like a bad habit immediately after the show stopped taping.

In happier news, Ashley I. and Kevin seem to be going strong. They are visiting each other. She gave it up to him without admitting it. She even took him to a Patriots game to see his idol Tom Brady. Needless to say if Ashley I. can find love, anyone can. There is hope for you Jim, I’ll keep saying that to myself.

Now, the promised shocker of the night. Harrison kept promising something major, as he always does. Clare comes out and talks about a “man” reaching out to her after she got back home. She connected with this man and says she’s fallen in love. That man is revealed to be Benoit. He joins her on stage. Talks about how it was fate that brought them together and he wouldn’t give up on her.

So happy ending for Clare, but it’s not over yet.

Benoit gets on his knee and unlike Dean he pulls out a ring and proposes to her. She accepts. We have a successful and happy Bachelor Winter Games ending. Everyone is joyous, the fellow cast members join them on stage and congratulate them. Wonder if Christian’s self-imposed German rules allow him to partake in this celebration? Needless to say everyone does. Clare is taken. Finally. The end of Winter Games. Lots of winners.

Take aways from the finale and Tell All.

Previous post ‘The Commuter’ Release Date for Blu-ray and DVD

Next post Must See Movie Releases of the Week (Feb. 20)