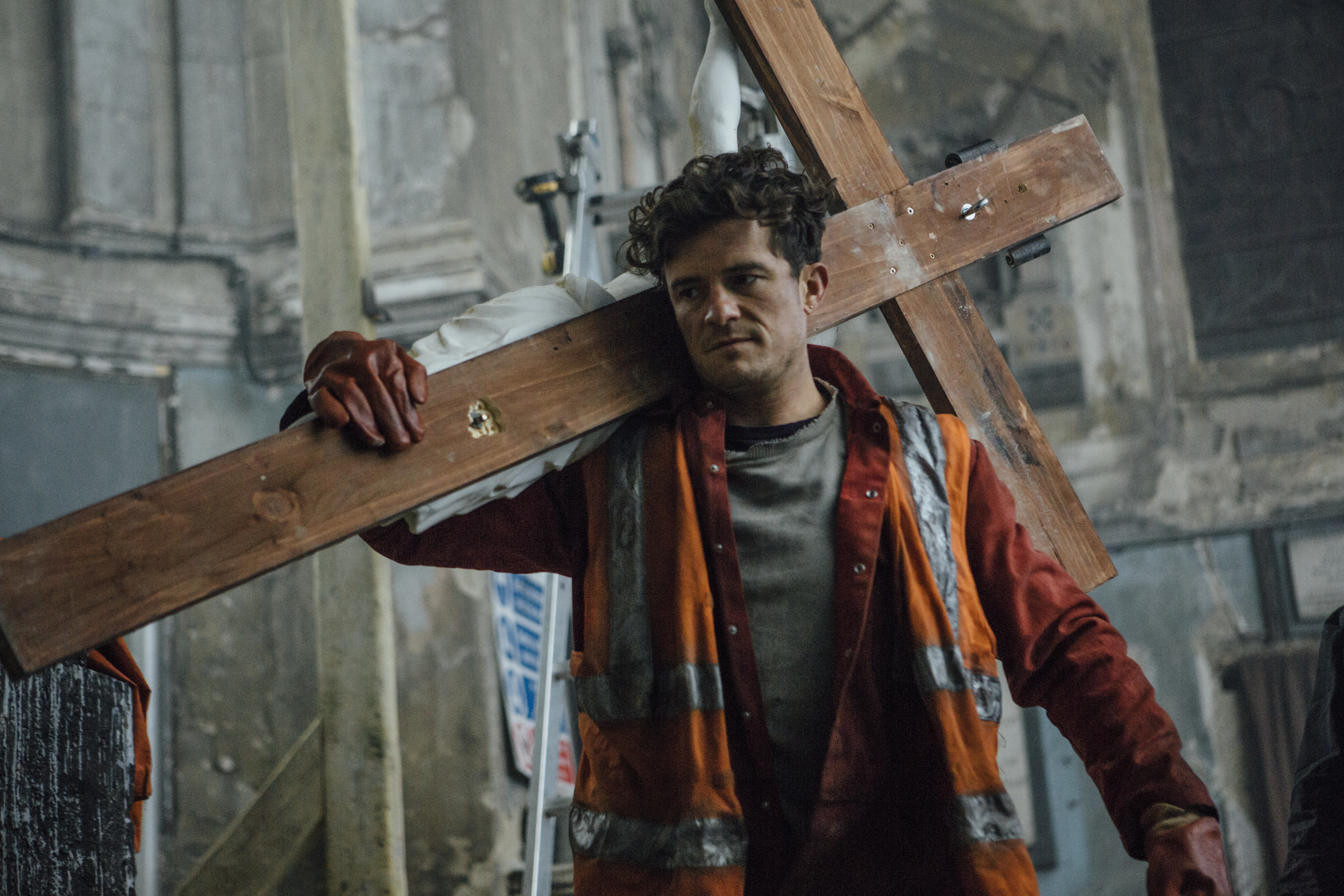 Orlando where have you been? It’s been a long time since Bloom appeared to be one of the most talked about actors, after he starred in The Lord of the Rings and Pirates of the Caribbean franchises. Since then Bloom has mainly appeared in indies and foreign films. In 2017, he starred in a film called Romans. The movie had a limited release overseas, now, three years later it’s releasing in the US under the name, Retaliation.

Retaliation is a dark and depressing story with Bloom in the lead. Does his performance hold, and is the movie worth sitting through all the down moments? Find out if Bloom, booms, (I know, corny but sounded fun) in Retaliation.

The story centers on a middle-aged man named Malky (Bloom). From the get-go it’s not hard to notice that Malky is dealing with internal issues. Malky’s job consists of demolishing churches. It’s not a job for everyone, especially some of his religious co-workers.

Malky has an on-and-off fling with a local woman named Emma (Janet Montgomery). It’s mostly a sex based relationship, if you even want to call it a relationship. At home, he takes care of his elderly mother.

Seems like it’s just a movie about an ordinary guy and a day in the life of him, yes and no. As the movie moves along more of Malky’s inner demons begin to unveil, until the truth is confronted. What is the secret he’s held deep inside for decades? That’s the big question the plot poses.

Retaliation is depressing. Period. It’s slow paced. Methodical. Watching it feels as if the film itself is holding a deep rooted secret from the viewer. It’s not happy or fun in any way. It depicts flawed and tortured individuals. People who are unhappy in their lives. Individuals that are looking to escape their situations, but are prisoners of their surroundings and habits.

Beneath all the gloom the movie showcases there are some valuable messages to take away. Retaliation bases it’s plot on what the inability to communicate and share feelings can lead to. It depicts someone filled with rage and pain that’s been harbored for decades, particularly in Malky’s case.

As a viewer I found myself curious and intrigued with what was causing the anger and hurt in Malky. In a sort of an oddly voyeuristic way. Sadly inner turmoil is interesting to witness. I felt like I wanted to help with the problems the person, in this case character, is dealing with.

This might be Bloom’s finest performance I’ve ever seen. He’s as raw as can be. It’s a powerful performance full of authentic emotions being conveyed. I couldn’t take my attention away from his on-screen presence that he displayed. He captivated the screen. Janet Montgomery does terrific work also. Her character carries an emotional burden caused by Malky’s lack of commitment. Montgomery conveys the emotional hurt that Emma is stricken with. Strong performance from a very talented actress.

Even though on the surface it would seem like a movie to skip due to its bleak nature, I’d recommend it. It’s a raw character portrayal of people suffering mental and physical anguish.

SPOILER ALERT: In Malky’s case, he’s dealing with years of pain due to being a victim of childhood sexual abuse. Which gets revealed in the second half of the movie, but the journey to figuring it out takes place in the first half.

There are some important messages portrayed in the story which could resonate and impact certain viewers who unfortunately might have experienced these situations. For good or bad, these stories must told. These are real life experiences that many have been impacted by. We need movies like Retaliation to be bold and to depict them.

Retaliation is not what someone would seek out to watch, but if you come across it, give it a chance and keep an open mind. If you can get through the uncomfortable parts then you can understand the meaning of it. Don’t be surprised if it doesn’t leave you with a satisfying feeling and closing. It’s not meant to.

RELEASE DATE: July 24, 2020 in select Theaters, On Demand and Digital

One thought on “Movie Review: Orlando Bloom’s in ‘Retaliation’”