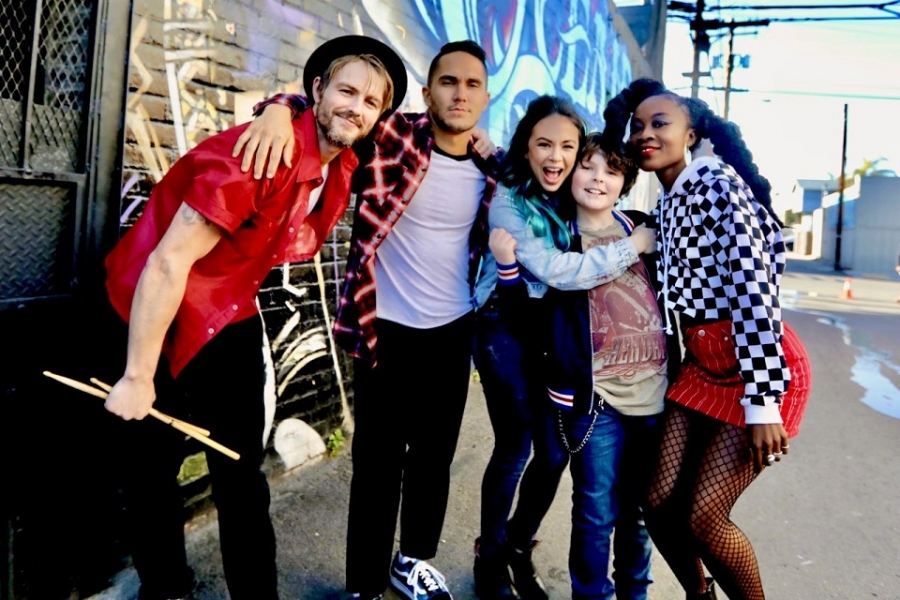 I know what you’re thinking. A kid movie about a tree? Those are the same sentiments I shared when I was introduced to Mighty Oak. To squash any misconceptions, it is NOT a movie about a tree. What Mighty Oak is though, it’s a movie that brings forth the question of reincarnation, amid a showcase of a really special musical performer. Does Mighty Oak hold up to its premise, or does it stand on shaky soil? Find out below in the full review of the film.

The story centers on a 10-year-old boy named Oak Scoggins (Tommy Regan), who is a musical genius (in real life also) and his unlikely connection to a former local band called, Army of Love. The group was disbanded after the tragic accident that took the life of their frontman Vaughn Jackson, played by music icon Bob Dylan’s grandson Levi Dylan.

A decade later, Vaughn’s sister Gina comes back looking for Vaughn’s guitar and comes across the talented 4th grader, Oak, who she begins to believe might just be the reincarnation of her dead brother. Is Oak the reincarnation of Vaughn? Has Gina completely lost her mind? Will a new group lead by a child frontman even work? Those are just a few of the questions the plot works through.

There are two ways to observe this movie. One way is to look at the messages it attempts to send and see the bigger picture it tries to provide. The other one is to observe it on the surface level as you would a Nickelodeon or Disney kid movie. Technically, it can work both ways, depends on the perspective. Personally, I tried to dig deeper.

The movie is certainly flawed if you attempt to pick it apart. Some scenes that I don’t want to spoil are irrational (hint: grandparents scene). Logically, why would an established band of 30-somethings want to revive a band with a child? It’s plausible, but highly unlikely way for a rock band to take. Then there is also the mysterious disappearance of Tommy/Vaughn’s guitar, with no explanation as to what happened to it.

While there more than a few puzzling plot holes, on the grand scale, the movie still works. At the heart of the story are these relationships that are formed that add some meaning to the story. I mentioned the messages that are being brought to light in the story.

One big aspect the movie focuses on is the reincarnation theory. Gina is convinced that her deceased brother is trying to give her signs through Oak. The story does portray Gina as a lost individual that’s searching to find her way in life without her brother and band. She appears lonely and searching for meaning. Ultimately peace and the ability to move forward with her life is what she seeks and Oak might provide her that opportunity.

Meanwhile, Oak is dealing with issues at home with his single mother that isn’t doing a good job raising him, instead she appears to be dependent on a 10-year-old to get her through the day. She is a former veteran who is dealing with personal demons and has an alleged addiction problem. She appears to be a junkie, but we don’t exactly find out the reasons for it and what she’s taking. That part is rather ambiguous, but noted. A tough crossroads for a kid that’s just trying to be a kid and hang out with friends, instead of being a caretaker to his mom.

There are a few other layers of real-life struggles that are outlined rather seamlessly. The two main issues I just described are a big part of the story. They are also real-life issues that impact people all around the world and might be relatable to someone watching. I felt these challenging life situations that the characters are dealing with add necessary depth and humanity to them.

I did like how director Sean McNamara and writer Matt Allen did manage to tie plot events together to make a lot more sense towards the end. Paramount selected this to be a movie they chose to release theatrically through drive-ins and select local cities that have theaters opening up. From that perspective, this movie is a big deal.

The lead actors did a fine job. Parrish is a known commodity and I enjoyed how her character was flawed, yet able to relay affection and emotion, even though she’s dealing with heavy emotional pain. She genuinely cares about her bandmates and especially Oak. I found Parrish to be likable in the role and Gina as a character.

Carlos PenaVega and Alexa PenaVega are married off-screen, but on-screen their characters barely interact. Both offer solid performances in their respective roles. Carlos plays Pedro, the likable and charming former love interest of Gina. Alexa plays Oak’s mother Valerie. Alexa has some strong scenes she’s at the center of.

Lets face it, the movie is about Oak and the super talented Tommy Regan that plays him. Regan wrote the songs for the film and performs them on-screen. It’s all him. I just hope people actually notice that. Tommy is a star in the making and he certainly proves that he can make a mark in the acting world also.

Mighty Oak was a pleasant surprise for me. It elicited more emotions than I could have expected it to. I appreciated the connection that the cast seemed to have, as it translated on-screen. The script and story is flawed, but with flaws that don’t hold it back from the ultimate message it relays. The message of love and compassion.

The actors put in a good effort and Tommy’s fantastic performances are worth a look. Mighty Oak might not be everyone’s cup of tea, but it’s relatable enough and interesting to stick around for the journey.