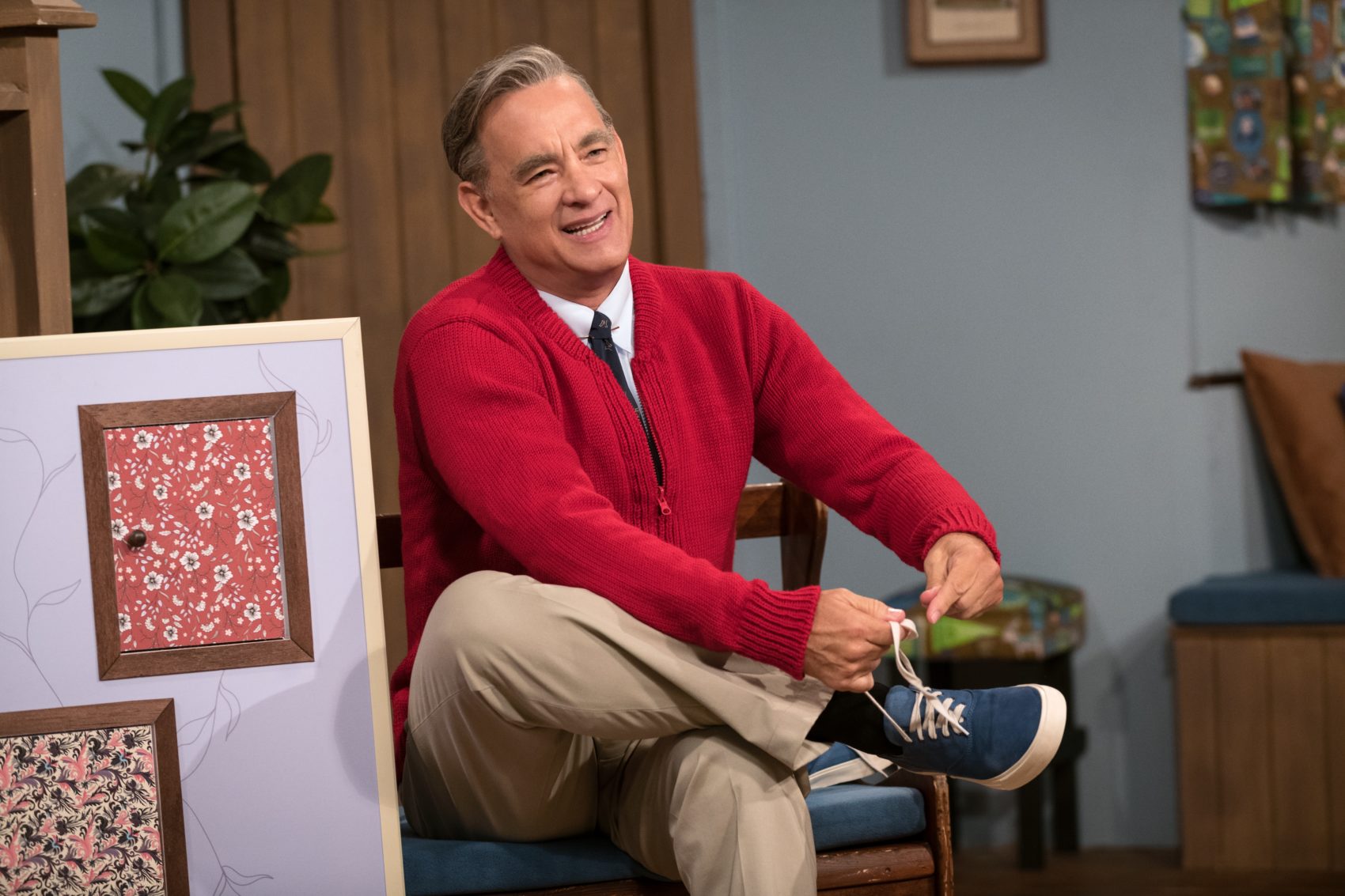 If you grew up with Fred Rogers gracing your television screens, consider yourself lucky to have had that experience. For those that weren’t too familiar with Rogers, the past two years have offered you an opportunity to do so. Last year it was the critically acclaimed documentary, Won’t You Be My Neighbor. Now it’s the movie, A Beautiful Day in the Neighborhood, but does this film bring you closer to knowing Mr. Rogers? Find out below.

It’s not about who you think. Common assumption would be that this is a movie about Mr. Rogers, with the legendary Tom Hanks playing him. It’s actually not quite that. The story is centered on journalist Lloyd Vogel (Matthew Rhys), who is writing a profile feature about Mr. Rogers.

Vogel is skeptical about Mr. Rogers as he begins his profile for Esquire, but through various life events, the men connect on a unique and somewhat unlikely level.

Hanks, as per usual, puts on a fantastic performance. He physically transforms into Rogers. It’s easy to envision Hanks playing Mr. Rogers, especially due to the natural likeability that Hanks possesses. If there is anything that Hanks didn’t perfect, it would be the voice of Rogers. It’s hard to mimic someone’s voice. While he did have the right cadence and tone, the voice is not that similar to Mr. Rogers’.

Rhys is good in his role, but Hanks still steals the spotlight with his portrayal of Mr. Rogers. While the acting isn’t an issue for Rhys, his character is. More on that in the next section.

Nice work by Chris Cooper playing Vogel’s father Jerry, who seems to be a catalyst for many of the inner demons that Vogel is dealing with. As the saying goes, behind every great man is a great woman. Couldn’t be more truer of Joanne Rogers, the wife or Fred, played by Maryann Plunkett. She’s fantastic in the role and is one of the glues of the story.

If Joanne is the glue that helps Fred being the best version of himself, then a similar thing can be said for Andrea Vogel, the wife of Lloyd, played by Susan Kelechi Watson. Very good performance from Watson and bless her character for having to deal and stand up to the moody Lloyd.

The movie is based on a true story. The real-life journalists name was Tom Junod, but for movie story purposes, it’s altered. It’s a fine script and it’s well developed, but Mr. Rogers is a supporting character in it. The title, trailers and all promotional material were set-up to lead you to believe this was a story with Mr. Rogers at the forefront. I felt mislead by that.

This is definitively a movie about Vogel and his personal story, with Mr. Rogers being a vessel to uncover the private side of Vogel and his struggles. The filmmaker Marielle Heller and writing duo of Noah Harpster and Micah Fitzerman-Blue set up their lead (Vogel) as a cynical and fairly unlikeable jaded character.

The story takes some time to develop and if you stay with it the utter goodness of Rogers will make you feel sympathetic for Vogel. I have no notable issues with the script and plot, it’s solid, but the use of Rogers in it was unexpected.

It’s an interesting movie, but not in the way you expected it to be coming into. I can see it turning someone off, based on the plot. It’s impossible to dislike Mr. Rogers in any capacity. The movie does share some important messages that Rogers has spoken of throughout the years on television.

The difficult part for me is finding a reason to care for Vogel. I wanted to see more of Mr. Rogers. Still fair to question the writers and promotional team that evidently set-up some roadblocks for the viewer to overcome and get on board with the story.

Yes, Vogel was portrayed as a douchebag, but he does have a developing introspective journey through his interactions with Rogers, that makes him more likeable as the story progresses. It’s part of the true story that had to be honored, but still a difficult task for the filmmakers to have with a lead character.

I’d give it a chance. One thing that the movie has going for it is this little known personal story between Vogel and Rogers. Mr. Rogers touched hundreds of young lives, but this illustrates an adult who was directly impacted.

The highlight excerpts shown of Mr. Rogers television show look nearly identical to the real thing. The cool behind-the-scenes look and the production of it and the people who were there with Fred along the way give you an insight into the man, but more through the lens of others.

It’s ultimately Vogel’s story with Rogers being depicted through the several people in his life and those he impacted. It’s a neat perspective. If you want a more focused depiction of Mr. Rogers, check out the documentary. It’s always a beautiful day in the the neighborhood when you get Mr. Rogers to be a part of it.

‘A BEAUTIFUL DAY IN THE NEIGHBORHOOD’ Score: 70%