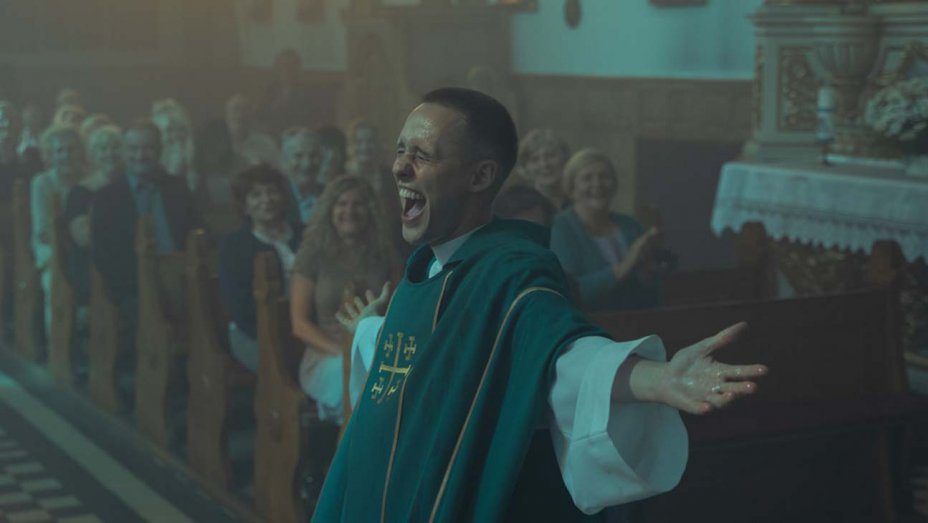 If you’re nominated for the Best Foreign Language Film for the Academy Awards you’ve accomplished something special. Corpus Christi is special, in more ways than one. Personally, this movie hits home (literally) for me. Being of Polish descent and raised in Poland, this film had a special meaning to me. So what makes Jan Komasa’s Polish drama a must-see? Find out in the complete analysis below.

Corpus Christi (Boze Cialo) is inspired by true events of one of the unlikeliest of priests. Daniel (Bartosz Bielenia) is a troubled young man working at a carpenter’s shop, after being released from parole. The crime he committed prevents him from chasing his dream of becoming a priest.

Equipped with his priest attire, Daniel gets a new lease on his dream when he stumbles (literally) into a small Polish town that’s in need of an immediate replacement for their priest. Daniel’s uncustomary approach has the town shooken up, but can Daniel become the priest that they don’t realize they need?

This is a career making performance from my Polish hometown (Bialystok) resident, Bielenia. He’s extremely dedicated to the part and his commitment to the character is apparent in the way he puts his soul into the performance. This is a tough role to play, not only because he needs to convince the audience of his character’s choices, but also because of the emotional rollercoaster he conveys throughout the story. Bielenia is a star in the making.

Additionally, the film boasts an impressive supporting cast of Polish actors whose characters play an integral part in Daniel’s transformation, as well as convey their feelings about strong thematic issues. It’s almost unfair to point out two specific actors, since the majority of the supporting performances are strong and fitting of the narrative, however, Eliza Rycembel and Aleksandra Konieczna deliver splending performances.

Rycembel plays Eliza (fittingly, since that’s her actual name), a young nun who challenges the archetypes of the local Catholic church. Rycembel is quietly captivating in her portrayal of Eliza. Meanwhile, Konieczna plays Eliza’s conservative mother, Lidia. Konieczna’s expressive face translates a lot of emotion without even speaking.

The concept for this script challenges the viewpoints of a nation’s religion. Growing up in Poland, I have firsthand knowledge of the importance of Catholicism. The vast majority of Poland is Catholic and the religion is passed down through generations of Poles. What Komasa and writer Mateusz Pacewicz do with this movie is brave and very bold.

The story is intriguing and just when you think it’s about to settle, another truth is revealed. Daniel holds a lot of secrets, but each character has some sort of inner turmoil and pain they are hiding. The setting takes place in a small town that’s bred on old traditions, but with several families hurting from an accident that took away some of loved ones. It’s a multi-layered story with multiple facets. Daniel’s has dark secrets that he attempts to keep hidden from the townspeople in fear it will blow his cover as a priest in disguise, while also trying to help them rid of their pain and help them find peace. That’a a lot of burden on one person.

Bielenia’s character is the voice of the writer and directors message. The filmmakers pose some difficult and fair questions about the messages that Polish Catholics have worshiped for centuries. Are the teachings and beliefs outdated and unfitting in today’s society? Do Daniel’s progressive and unconventional ways demonstrate a more improved and rational religious belief? These are just a couple of the many questions to debate during and after the movie. It’s a part of what makes this film so compelling and a major conversation starter.

This movie won’t have universal appeal. It’s subject matter may deter many of Catholic faith, as well as those who are more traditional and of a different generation. It’s pretty raw and uncensored when it comes to profanity, some strong sexual moments and violence. Not a movie for kids.

Some will take issues that it’s a foreign movie with subtitles. It’s an issue that hopefully will start fading as we are exposed to more quality foreign films. Sure, I had an advantage of not having to read the subtitles, but they make the movie easy to digest for anyone. You don’t have to understand Polish to appreciate this movie.

Films like these have not been made in Poland by the previous generation of filmmakers. Komasa and Pacewicz are a new breed of Poles with a worldly and artistic outlook, who are asking questions and challenging the generational traditions. This is a huge landmark for Polish cinema and it’s exclamation mark on their place in world cinema.

The new wave of Polish filmmakers such as Pawel Pawlikowski and Komasa are changing the game by brining Polish stories to a worldwide landscape in ways they haven’t been done before. This film undoubtedly will spark a debate and opposition from the church due to its sensitive nature of the theme.

As a Pole, I feel proud movies like Corpus Christi are being made. Polish cinema is relevant and there are many stories of Poles to be told. This movie further proves that Polish actors are ready to make their mark and the quality of filmmakers is great.

This is one of the best Polish films I’ve ever seen. Startling and daring. It’s rightfully earned its place among the top five foreign language movies in the world. A story about small town culture, religion and those in ministry.

What I feel Komasa accomplishes the best is highlight the normalcy and reality of the lives of some of these priests and nuns. I’ve seen it myself growing up there. In countries like Poland the priests are revered members of the community, held in high regard, but truth is they are human and have flaws. To hold priests and nuns to an impossible standard is unfair. This movie exposes this unpopular truth and depicts it with a rawness that is eye-opening.

I can keep going on about this film, but to really appreciate it, it’s best experienced by watching it. No matter where you’re from and what you believe in, the story and acting carries this movie to a place where no barriers can reach.

For more on where you can see the film, check out Film Movement