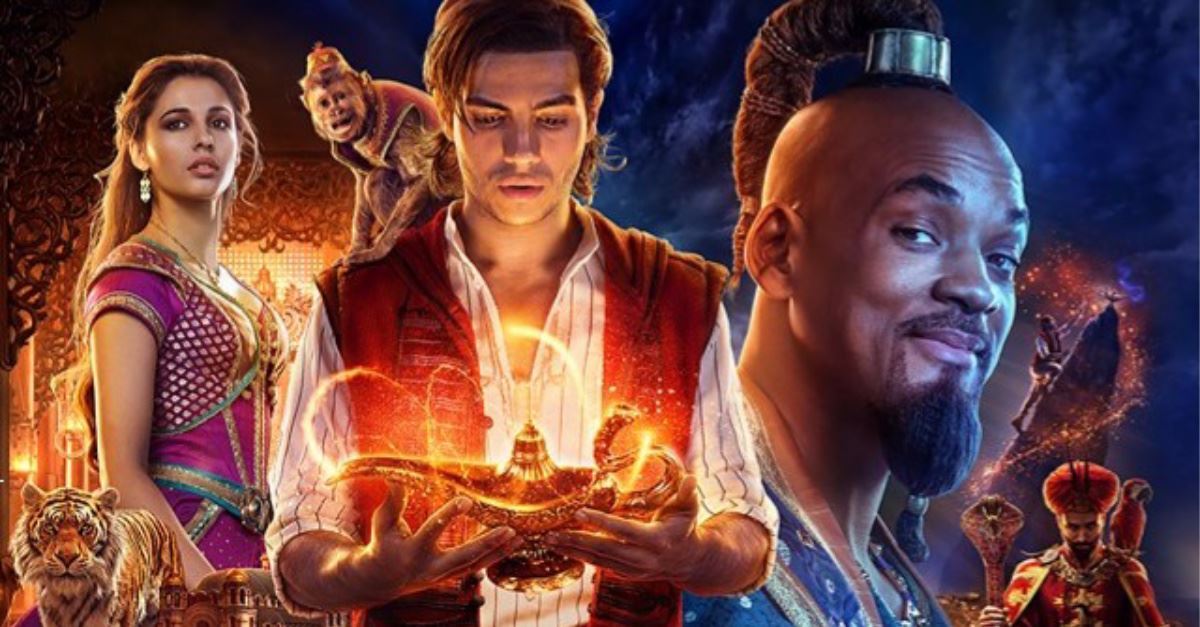 A magic carpet, magic lamp and a common street thief. Sounds familiar? Yes, it’s Aladdin. This time around Aladdin comes to you in live-action. Does the new version of Aladdin hang with the beloved original animated one? Find out below.

Lets face it, it’s about the girl. It always is. In the case of Aladdin, it’s also about the lamp and the genie inside it. Aladdin has eyes for princess Jasmine of Agrabah. Of course it’s never that easy. Aside from being a poor street thief, the evil Jafar is plotting to stop Aladdin and take control of the genie.

Needless to say there is a lot going on. I’ll pretend you didn’t see the original and lay out the plot questions. Will Jafar get the genie before Aladdin? Will the street boy get his princess? The story is very much on par with the original, but there are some additions and it’s not replicating the original scene for scene. Things have been altered a bit. Expect a few surprises with old and new musical numbers along the way.

This is the key point to the movie. Gone are the animated characters. They are replaced with humans and fancy CGI. The CGI is impressive. The character voices we loved are replaced also. In many ways it’s a completely new and different feel to Aladdin.

Mena Massoud has giant sandals to fill of a beloved Disney character that has been only known in an animated form till now. The virtually unknown actor really surprised me how easily he transformed into Aladdin. He’s charming and fun to root for. Massoud nails the role.

Princess Jasmine is played by the stunning and talented Naomi Scott. I couldn’t imagine a better cast role of Jasmine. She looks the part and has all the aura of princess Jasmine. Scott is a budding star. She is ideal for this. Her chemistry with Massoud isn’t perfect, but it’s believable enough.

Will Smith steals the show as Genie. This might have been the toughest role to live up to. Robin Williams is the voice of Genie. Always has been. Voicing that role comes with a big expectations in living up to what Williams did with Genie. Not only does Smith create his own splendid version of Genie, but he’s acting the part also. Smith brings life and humor to the character.

Guy Ritchie is firmly in charge of this film as director and co-writer. He wouldn’t have been the first person to come to mind being behind this project, but surprisingly he does a good job all-around and seems to know the tone of what Aladdin is supposed to be.

The script has a solid pacing, but takes a bit of time before we get introduced to all the main characters. There are some action scenes, but they are more reserved for chase scenes of Aladdin running through town. The musical numbers are grand and elaborately colorful. Very well done. Felt like watching a big time Broadway musical. Thankfully they kept all the original classic songs.

I felt the film had a theatrical element to it, especially with the musical numbers, sets and costumes. The story does follow the Aladdin animated movie pretty closely, but not copy and pasted. That’s a good thing. There are some added scenes and new dialogue, as well.

I found the live-action Aladdin to be entertaining and fun. It actually was a pleasant surprise, since the animated version is such a classic and personal favorite of mine. The original songs are there to sing along to. The characters are colorful and lively.

They did miss out on Jafar. I didn’t particularly care for him at all in this movie. He wasn’t very memorable and there didn’t seem to be much focus put on him as there was in the original. He never establishes a presence. He is just kinda there. The use of a character of his essence should have yielded a much bigger reaction and importance in the story. Instead he feels like a irrelevant roadblock that’s in the way of Aladdin and Jasmine.

Yes, it’s good. The film was satisfactory for me. The Genie is highly entertaining, even though other characters like Apu and the carpet fade into the background. Massoud and Scott do as well as they could given the nature of their roles.

Aladdin is an action adventure that’s visually appealing. It will be enjoyable for the kids and parents. Fans of the original should be happy. This live-action attempt could have easily gone off the rails, but it doesn’t at all. A fun filled ride throughout. You may not have a magical carpet, but a fine recliner will suffice in enjoying another live-action Disney hit.