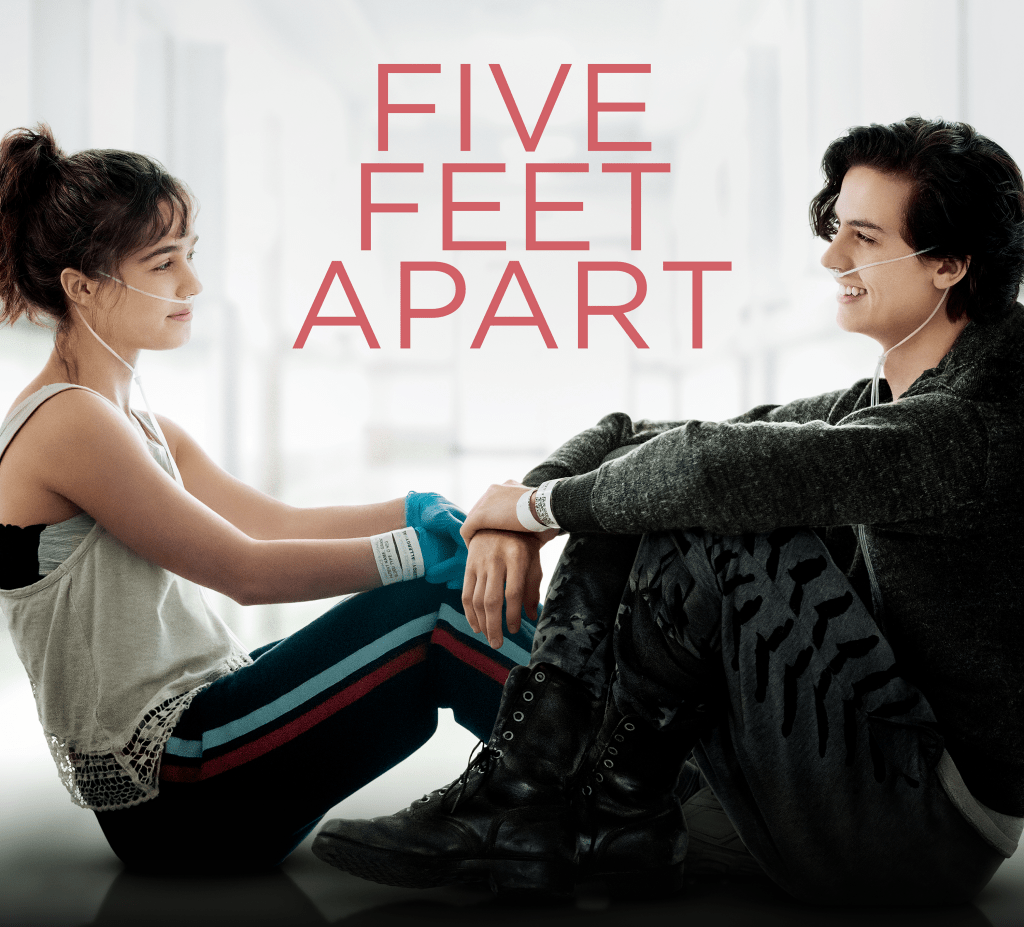 We missed you teenage love stories, you haven’t been around much lately. Five Feet Apart is a teenage romance story, but not a typical one. At the center of the story is a real life issue that affects many people and teens around the world.

Cystic Fibrosis is the disease that the leads are facing. Does the movie teach us an important message about this disease or does it miss an opportunity to make a statement? Find out the answers to that and other questions facing the characters.

Stella (Haley Lu Richardson) and Will (Cole Sprouse) are cystic fibrosis patients at a hospital. Stella is a very focused and meticulous individual, while Will can be said to be the opposite of her, carefree and stubborn. Initially the two don’t see eye-to-eye, but after countless run-ins with another they start to develop a friendship. They both begin to bring out the best and worst in each other and pushing another to new limits.

As love begins to blossom between Will and Stella, it becomes increasingly obvious that their disease will be the biggest roadblock in their love story, as they must be at least six feet apart from each other at all times in order not to get sick. A rollercoaster fight for their love and their lives ensues with countless obstacles facing each of them.

Richardson is quickly becoming one of the best young actresses in Hollywood. She’s relatable and charismatic, with a jubilant natural energy that radiates through the screen. You feel for her in this film. She plays such a determined young lady that many will find inspirational.

Sprouse is a big name to teenage audiences already, as one of the main stars in the wildly popular CW series, Riverdale. He has great chemistry with Richardson. They are engaging and likeable, even though his character is a bit rough around the edges at first, but by the end you’ll fall in love with him.

Terrific casting of two young leads that not only look the part, but are fantastic actors in their own right.

This is a well-written script with very few flaws. Of course the genre lends itself to natural troupes of being sappy and melodramatic. Obviously romance will be apparent, but it never feels forced or rushed.

The story allows you to get to know each character individually before they connect and understand their personal life struggles with their disease. This is not just some random teen romance, it’s a movie about being a young person dealing with the daily struggles of having a debilitating disease.

An important aspect to note is that there is significant focus on showcasing the characters dealing with the medical aspect of their disease. Timing their treatment regimen, eating habits, getting shots, etc. Feels important to note that the portrayal of the daily struggles was objective and noted, not glossed over for more entertaining story purposes.

You’d imagine that a movie that has two of its main characters dealing with a life-threatening disease would be mainly somber, but it’s not. Will and Stella go on a journey of ups and downs with each other. From silly and dumb teenage decision making to sweet moments of love. There is certainly enough to keep you entertained and engaged without feeling down throughout.

Five Feet Apart is one of the best and most important teen romance films in recent years. It sheds light on a disease that doesn’t get much notice, especially in films. It’s sensitive to cystic fibrosis patients and informative enough for those who aren’t familiar with it. I felt I learned a lot more about the disease from this movie and how the characters were portraying it, than I had known prior to it.

It’s great to see a story on screen that’s both educational and enjoyable. No doubt, tears will be shed. The inspiration it provides to someone dealing with the disease can be invaluable. Six feet apart means little to most people, but this story makes every inch in your life worth noticing and not taking it for granted.