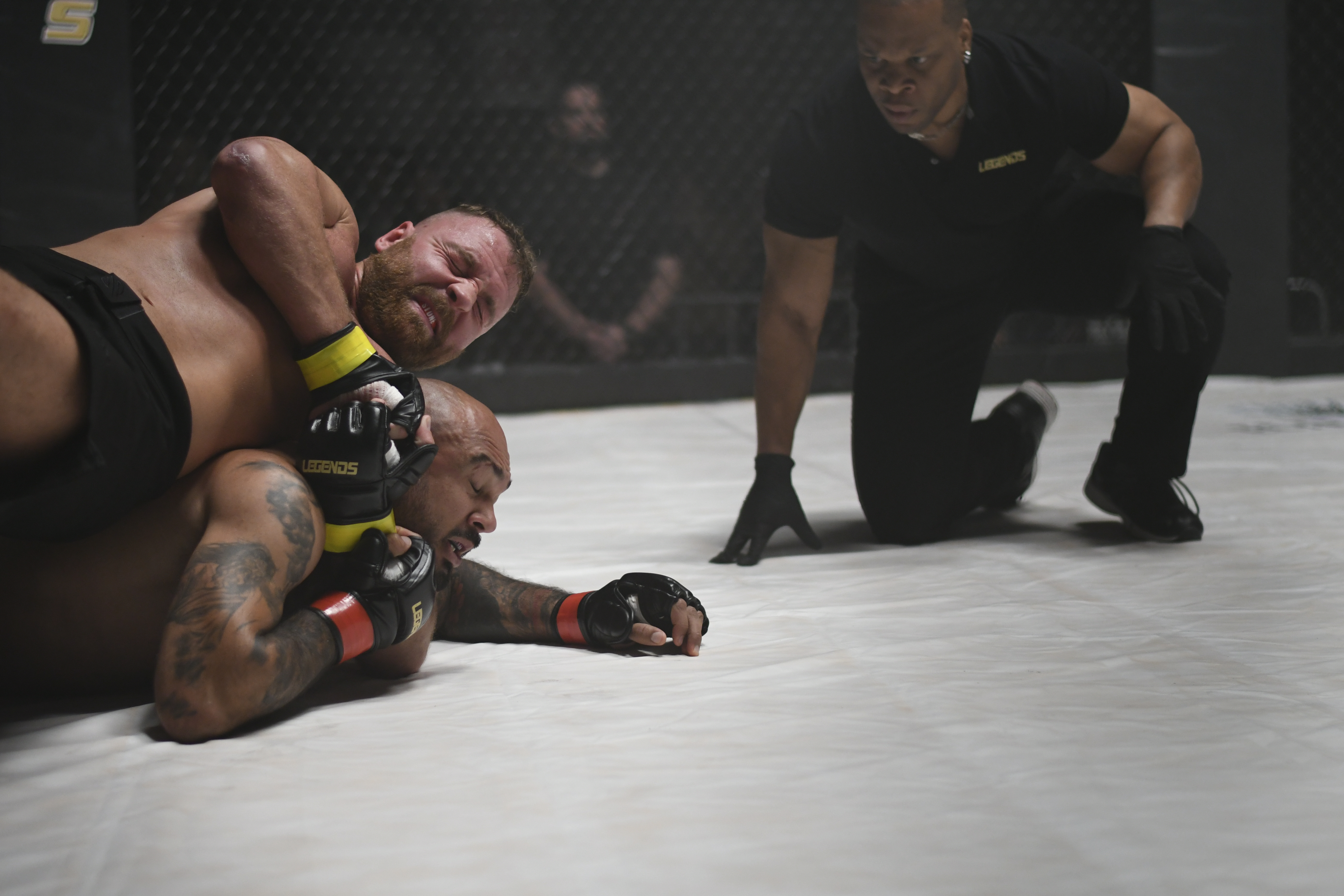 Pro wrestling and MMA are two forms of sports entertainment with passionate fans and charismatic personalities. What would happen in a dream scenario where a top MMA fighter would go against a top pro wrestler? You’ll have a chance to witness this dream cinematic possibility in Cagefighter. Does a “fake” fighter have a chance to take out a real MMA stallion? Find out below.

What appears to Reiss as an easy payday and non-competitive fight turns into a struggle to stay in the industry he loves.

We have seen movies of this genre frequently, especially in recent years with the popularity of MMA. Fighter is tested with an obstacle and a fierce opponent. He trains, against the odds all leading-up to the big fight at the end. Not in this movie. The story arch follows a reverse plot. Fight occurs early on and then the meat of the story are the after effects of it. I liked this twist on a rather formulaic genre. It added intrigue and freshness.

The two main stars are played by an actual former MMA fighter and current pro wrestler. It gives legitimacy to the characters, in Moxley’s case, he’s basically being his wrestling character in the movie. The fights itself looked pretty well choreographed and depicted faithfully. The kicks, punches and submissions looked pretty authentic. That’s always a big plus in a movie of this type.

I wasn’t fan of the soundtrack and score. The music wasn’t the problem, it just didn’t fit in with the movie and the story at all. Best described it sounded like it was copy and pasted from an anime feature or video game from the 80’s (think Tetris music). Never synced up. Just a bad call on that front.

As I touched on above, the casting is fitting. Montagnani fares well in the lead role. He showcases his MMA background, but I was impressed with his acting. He is likeable on-screen and you feel for his character, who was easy to root for.

Moxley (Good) is currently one of the biggest stars in pro wrestling. He’s the current champion of All Elite Wrestling. Being a fan of Moxley’s I’m familiar with his in-ring persona, which is nearly identical to what his character Randy Stone is in the film. Ruthless, wild, mad man that spews a heck of a promo. Looked like a seamless transition from ring to screen.

Gershon is sort of the surprising casting in the movie. She is what you’d imagine a fight promoter to be. Hard-nosed, confident and smart. All qualities that come through in Black. She was the buffer that more than holds her own between the two macho guys.

I was pleasantly surprised by Cagefighter. It doesn’t have the high end production value, but it doesn’t need to. The story takes place in London, which I felt was an interesting setting. Vegas would have been too easy to choose, as it’s synonymous with big fights.

Moxley is very entertaining. His promos are top-notch and hilarious. The buildup to the fight and set-up was impressive. Including fight clips and mixing in promos. It actually got me hyped up. The fights were well executed. If a movie can hype me up at home and feel like a real fight then it’s doing something right. I felt that writer/director Jesse Quinones had the pulse on the concept and genre.

There have been bigger and more publicized fight films in recent years with big name stars that ended up being less impressive than Cagefighter. I found it to be entertaining and exciting, even if it has some corny moments (Reiss’ manager played by Elijah Baker goes a little over-the-top in some scenes).

Ultimately the ending is predictable, but the journey to it is worth the ride. Wrestling fans who check it out for Moxley will enjoy his work. Also, Jay Reso (WWE’s Christian) has supporting role in the film, playing an MMA radio host.

Fans of MMA and UFC will get their fix with the likes of Chuck Liddell, who plays Reiss’ trainer, along with former UFC Middleweight Champion Luke Rockhold. The movie has actual people from both the wrestling and fight world.

The idea of a wrestler or MMA fighter jumping into the opposing territory has been done multiple times before. Many MMA and UFC fighters have jumped to pro wrestling and vice versa. Look up some notable names such as Brock Lesnar and Ronda Rousey that achieved major success in both worlds. The those that are checking out the film casually, sorry to break it to you, but this concept isn’t far fetched or a fantasy booking, it’s been done before.

Cagefighter locks up two personalities that mesh well together in a good versus bad guy battle. The story has enough heart to keep it from being a glorified movie fight night. A pleasant surprise fight collision that doesn’t even need Dana White and Vince McMahon to hype it up.

RELEASE DATE: October 9, 2020 in Theaters and On Demand

One thought on “Movie Review: Pro Wrestling and MMA Collide in ‘Cagefighter’”