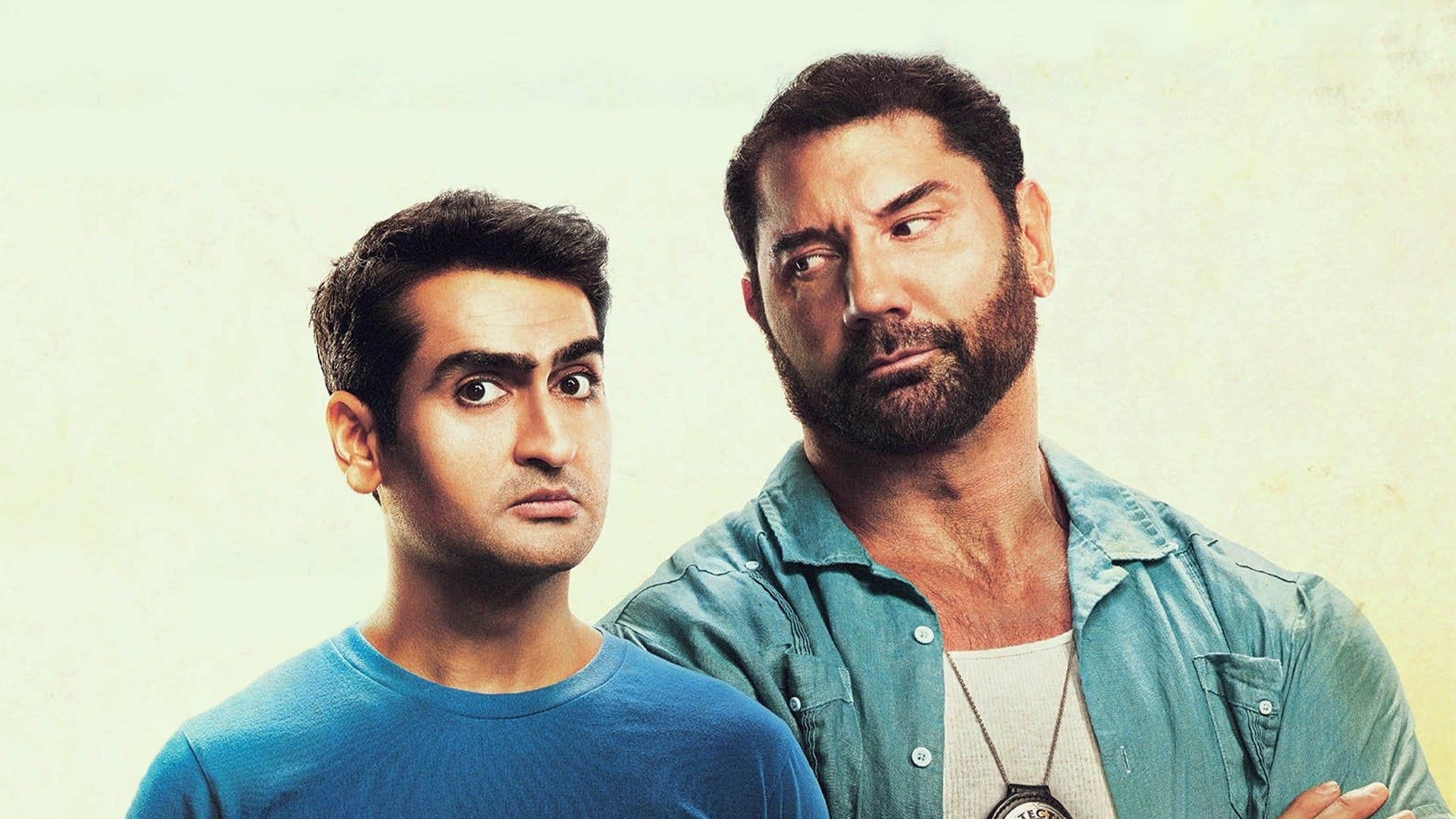 The dynamic modern comedy duo of Kevin Hart and Dwayne Johnson finally have some serious competition, enter Dave Bautista and Kumail Nanjiani. So, does the unlikely duo of Bautista and Nanjiani do enough to navigate the script and make you connect with it? This is my Stuber rating and explanation:

The Hangover films succeeded with playing around the concept of a night full of adventures and discoveries. In Stuber, the day turned into night adventure is between a detective and an Uber driver. Big burly Dave Bautista plays detective Vic Manning. While he is imposing in stature, Manning has a few screws loose, in a addition to poor eyesight (more on that in the movie). On the other hand, Stu (Kumail Nanjiani) is an awkward mild-mannered wisecracking guy who drives Uber (or Lyft) for work and social interaction.

This leads to the imposing goofy detective meets non-imposing goofy driver. It’s an unlikely match made in…car. Quickly, Stu finds out that in order to get a five star rating he must assist Manning in his quest to solve a case.

As you can imagine those two don’t have a smooth ride anywhere. They bark and bicker as they attempt to survive each other as they somehow pursue a crime case that guides them all over Los Angeles.

The big questions in a buddy movie like this is if the lead actors had enough chemistry to put over the script. The answer to that is a resounding, YES! Visually these two men are polar opposites, but when they come together they make on-screen magic. I was very surprised how much chemistry Bautista and Nanjiani had. It’s pretty evident that Nanjiani would deliver the laughs, but Bautista came through on his end and matched Nanjiani’s humor.

Bautista looks like a guy who you wouldn’t want to ever be caught staring at. The former professional wrestler looks like a lead villain in any action movie. We saw a comedic side of him in The Guardians of the Galaxy, but in Stuber he takes it up a notch. His deadpan comedic timing is impressive. Bautista shows a lot of versatility in this role that certainly will lead him to a lot more comedy work.

Nanjiani is quietly becoming one of the funniest actors on-screen. He has the relatable everyday man image about him that carries over to his characters. He’s very likable. He drives the humor here and arguably delivers either a clever one-liner or hilarious expression in every scene.

If we are going to break down the script and story, and search for blunders, you’ll find them. There is a plot twist that is revealed at the end, in regards to the mastermind behind the crime that Bautista’s character is trying to solve. The motive for this character’s turn is as uninspiring as it is puzzling. There seems to be no reason why this character should have turned out to be a main villain.

When Manning and Stu aren’t riding around LA chasing bad guys, we get a moment of clarity when Manning’s daughter Nicole (Natalie Morales) is introduced. Nicole is a character that seems to be brought in to give more depth to Manning’s character. Nicole is used as a convenient pawn between Manning and Stu, rather than having her backstory elaborated on, even though her character is far more important to the story than she gets credited with.

Yes, the movie centers around a detective and a crime, but I was surprised how violent and graphic it was. You’ll definitely see blood and limbs flying around, warranting of that R rating.

Was the movie entertaining? It was. The comedy is well written, but the execution by Nanjiani and Bautista makes it sound like a million bucks. This is how the right casting makes a standard script shine. There are a lot of laugh out loud moments throughout. Often times, it’s the actors that make the comedy come alive, just by physically conveying the humor.

There are several scenes to pick from that are memorable. The veterinarian’s office and the strip joint are the immediate ones that come to mind. In these two scenes Nanjiani truly demonstrates why he’s such a comedic force.

This movie is supposed to be funny, and it is. I am not an easy target when it comes to biting on snappy zingers, but the humor is genuinely good enough to elicit some real laughs, instead of plain chuckles. The purpose of this film is to be silly and entertaining, which it accomplishes to do.

You will fall in love with Bautista and Nanjiani if you haven’t yet in their previous projects. They are genuinely a great on-screen team. The pacing is fast and the movie moves faster than the Uber ride Stu is attempting to provide, in this context that’s a good thing. The over-the-top moments actually work. Credit to the filmmakers for using the obvious concept of incorporating Uber/Lyft driving into a movie plot. This is one of the most prominent ways of modern transportation, so you’d think Hollywood would have been quicker to create a story based on this.

Stuber is a pleasant surprise. A simple basic story, but one that does it’s job in providing the necessary humor it’s based on, while delivering some heart and messages of family, friendships and self-discovery, along the way. Go ahead, hop into that Uber and tell them to take you straight to the theaters to see Stuber.