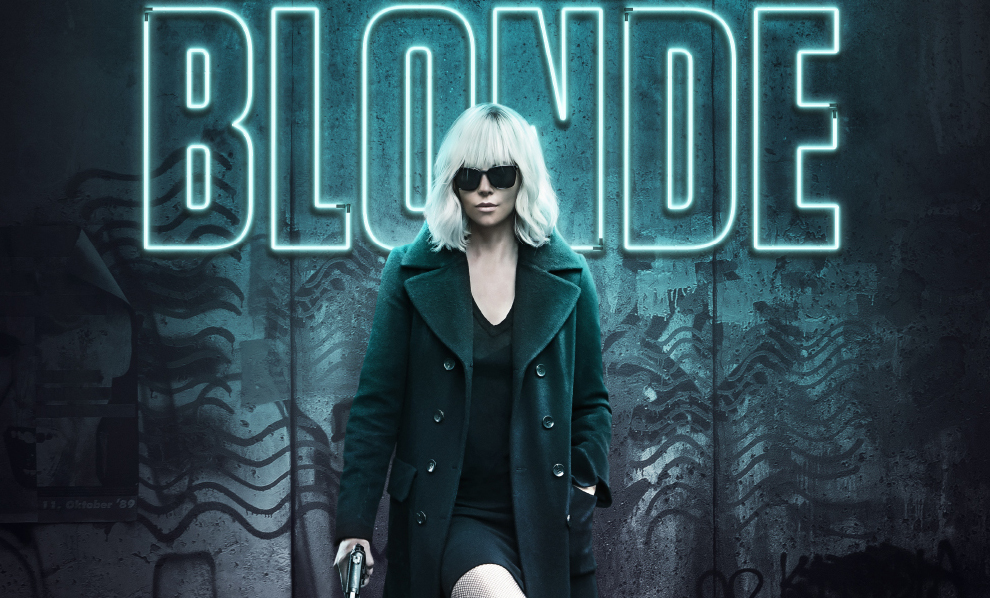 What can I say about this movie that hasn’t maybe been said already? Well, for one it’s tries to be many things and never settles on an identity. So Charlize Theron kicks a lot of ass, I mean, a lot. The previews have been pinning her character as a female James Bond, but James Bond didn’t stab baddies in the neck. She’s ruthless in this film. Jason Bourne envies what Theron’s badass Lorraine Broughton (not so badass of a name) does in this film. It’s more violent than I expected it to be. Some parts are even cringe worthy.

Theron plays an undercover MI6, no, not referring to the 6th Mission Impossible movie, it’s a British government spy organization. The time and place is is late 1980’s Berlin, in times of the Cold War. The Atomic Blonde, aka Lorraine, is sent there to investigate a murder of a fellow agent and to retrieve a very important list of double agents. Needles tot say there is a lot on Broughton’s plate and a lot to follow in the film.

While the plot shouldn’t be too difficult to follow, I found myself lost throughout. There are so many different faces bouncing onto the screen that it was hard to keep track of who is who, much less who is working with whom. The action is too frantic to be able to keep up, they also don’t do a good job of attempting to have you follow and elaborate. I constantly found myself thinking, whose the short quiet wimpy guy? Or who is the clean cut dude assisting in the coordination to Broughton?

Theron really gets it done. Kudos to her for getting down all the choreography training and getting into incredible shape to perform some of the stunts and fight scenes. She’s very fitting in this role, actually, may be the most fierce and intimidating female action character I’ve seen in a while.

Aside from Theron, there is a nice supporting cast to assist her. James McAvoy plays a sleazy Berlin confidant named David Percival. I liked McAvoy’s work here, as always. He plays a untrustworthy sidekick that you can’t necessarily trust, but you kinda want to. McAvoy is the right casting.

John Goodman plays one of the directors that’s conducting the mild interrogation with Broughton. He’s great in these sort of roles. He projects this directness about him that’s both serious and entertaining. To think about this man was mainly known for being on Roseanne for a big chunk of his career. Craziness.

The other supporting actors with significant parts are played by Sofia Boutella, who is rising fast, having already starred in the new Tom Cruise Mummy film. She’s solid in her role in this film, but not sure I get the Boutella hype? I mean she’s not super hot, she’s a serviceable actress, so what’s the big deal? Is it because her name rhymes with Nutella? Must be it. Another Broughton sidekick is Merkel, played by Bill Skarsgard. I swear I’m about to conduct a search as to how many Skarsgard’s are there?! Are they all brothers? Is there a Scandinavian law that forces all Skarsgards to become actors and head to Hollywood? Upon further search, this is what Imdb says on this matter:

So there it is. The Skarsgard mystery solved for you.

HOW DID IT LOOK AND SOUND:

For the most part the film looked and sounded good. It really had a 80’s vibe to it. It’s how I imagined Europe to be and look during that time. The background music was fitting and pretty cool. Let’s just say the soundtrack included the very popular Euro mix “Sweet Dreams”. Just check out all of it below:
The look is exactly what I would envision Berlin to be during that time period. Tons of graffiti all over. Dark, brooding, mysterious and exciting. The clothing was timely. I mean Theron wears some interesting outfits and she can make anything look good, including those boots she wears. Theron does show a lot of skin and nudity, she has a steamy sex scene with Boutella, so be prepared, definitely not for kids.

The action was exciting and intense. There is a lot of ass kicking, mainly by Theron. There is one extended scene in a apartment building that sticks out. Don’t want to give it away, but it’s jaw dropping. At my screening you could hear a few excited people cheering and laughing, well mainly one particular woman behind me.

The plot on the other hand was convoluted and tried to do too much. There are so many double crosses that I was lost after the first reveal. By the end I didn’t know who was who and why they were who they were? Twist after twist without much of an explanation.

Pros
Atomic Blonde is one of those movies that you need to weigh the pros and cons of paying for a movie ticket. As a rental it’s worth it, but as a theater going experience not so worthy. If you’re looking for pure action then you should go see it. There is a ton of cool action scenes. If you’re a Theron fan, you should also see it mainly because you haven’t seen her in a role like this putting out this kind of menace. The music and look is good also. Those would be the pros.
Cons
Now onto the negatives. As mentioned throughout this review, the plot is confusing and hard to keep up with. I would have liked them to spot at various points and explain what is happening. It moves too fast to keep up or invest in any character, besides maybe Theron’s and McAvoy’s. I think I finally understood who was backstabbing who, but I’m still not that sure. Less would have been more when it comes to the twists and surprises the film presented.