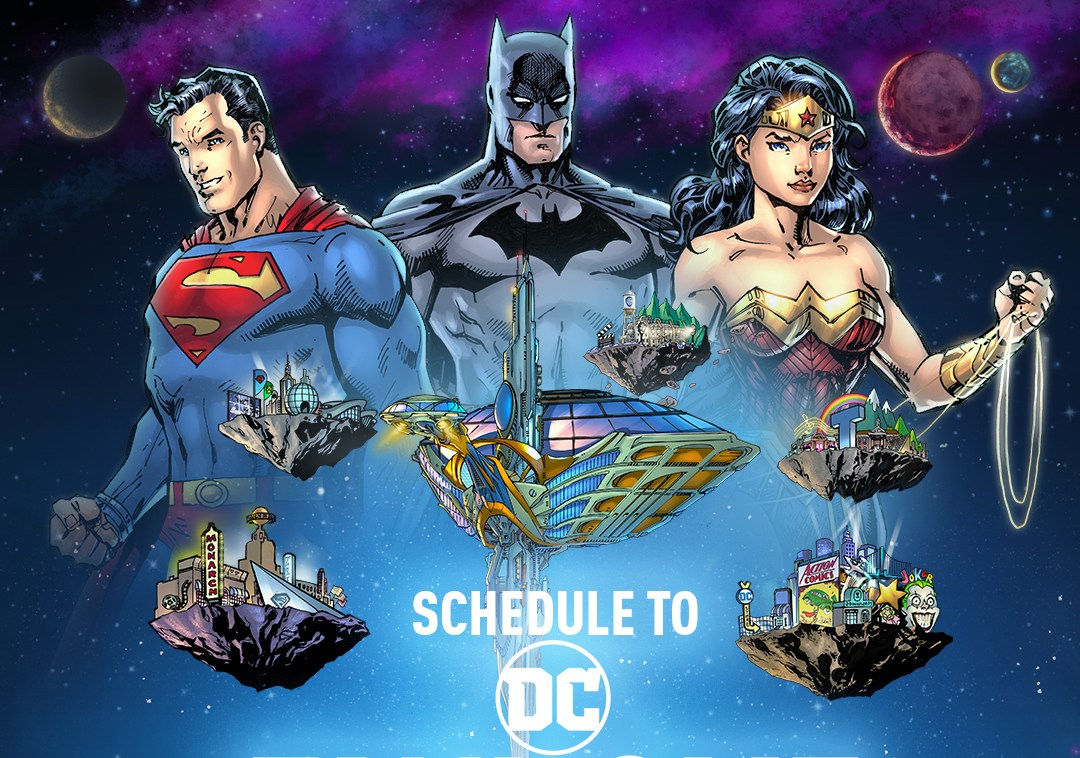 DC FanDome came and went, but did it leave us with all that we desired? The first grand virtual comic con made its debut on August 22nd for an unprecedented 24 hours. There are plenty takeaways and questions left days after, it might continue till the next FanDome event comes back in September. Did the reveals and surprises of “part 1” meet expectations?

We saw a mass gathering (virtually) of the biggest names in the DC Universe. From creators to directors to actors. It was a who’s who of DC. The prominent face of FanDome was DC Chief Creative Officer and Publisher Jim Lee, who was part of many of the panels. Lee was the key figure in a wide range of panels. Jim’s a knowledgeable voice on all things DC, so it was important to have him taking part in the discussions.

There was a total of twenty events that all took place in the “Hall of Heroes”. The focus was on the big name DC movies and shows. Basically a big preview for the upcoming DC movies such as Wonder Woman 1984, The Batman and Justice League Snyder Cut, plus glimpses into the new James Gunn Suicide Squad movie and Black Adam.

We also witnessed the first footage for the “Suicide Squad: Kill the Justice League” and “Gotham Knights” video games. Big surprises there. The games look amazing.

The main thing that the FanDome revealed that everyone was waiting for was the footage for The Batman. After some picture stills from the set leaked in previous months, we finally got to see video footage and a rather lengthy teaser trailer for the film.

There was a wide range and mix of content that would appeal to any DC fan. They did a great job of mixing the DC TV shows with the movies, comics and games. A little bit of everything for everyone.

WHAT WE DIDN’T SEE:

There isn’t much to nitpick here. We did get to see the main cast for WW84, director Patty Jenkins, Gal Gadot, Chris Pine, etc. Dwayne “The Rock’ Johnson appeared in the Black Adam preview, so that was a great surprise. I guess it would have been nice to have Robert Pattinson be part part of The Batman event. He did do a brief introduction for director Matt Reeves though.

Would have been nice to have Jason Momoa be part of the Aquaman panel discussion.

Like I said, lots of what we didn’t see was minor and didn’t affect the FanDome presentation. Plus, with the second part of the event coming in September, anything we missed can be included and added there.

I appreciated them having hosts from around the globe presenting the events and leading into them and not having the same person do it. I just didn’t see a reason to have the international hosts present in English. Unless, they were presenting in their own languages to their audiences (I wasn’t able to see that since I’m based in the US) then it serves a point, but didn’t think they were particularly great or looked comfortable presenting in English. They also seemed to put it on a little bit too much. Not sure of the international hosts experience level but they came off kinda amateurish.

I did like the fact that they had rotating hosts and moderators to keep things fresh and not redundant. I did feel some of the moderators didn’t match the energy of the panelists, which is a problem. I also felt some of the moderators were very generic in their questions. I do wanna shoutout Aisha Tyler who was there for the conversation with Matt Reeves, Aisha has been in the business for a long time and did a fantastic job with her questions and seemed very involved and knowledgeable.

Since the premise of FanDome is for the fans, I felt they could have had more interaction with the fans. More video questions, even more messages through social media. They were included, but I saw room for even more opportunities to involve the fans.

I wasn’t sure if FanDome was all pre-recorded or not? You certainly miss out on the live moments if it isn’t live, but I can understand them having to time out everything accordingly and polish the presentation by pre-recording it all.

If you missed it “live” you did get another 12 hours of replay. I would have liked it to have “on demand” content. So if you weren’t for it live or for the replay, you could go back and watch an individual panel event after the fact. I get the selling point of it all was 24 hours only, but at least make a Sunday on demand individual selection, where you can watch whatever you specifically like. I’m sure they’d get more views from those who weren’t available to watch on that day.

DID THE CONCEPT WORK:

Much credit to DC for going out on a limb and creating this event in seemingly a short amount of time (assuming they planned on it around the time of the start of the pandemic). They did a very good job with the presentation. The look and feel of it felt grand. The virtual “dome” surrounding looked fantastic. It was explained in one of the segments that Jim Lee drew and created the graphics. Great work. Very nice 3D appearance.

The programming of the event was a big success. The events didn’t drag too long. The longest ones were some of the big movie panels which ran up to 30 minutes, which isn’t bad at all. Some of the smaller ones like “The Joker: Put on a Happy Face” were as short as 5 minutes long and were great transition segments.

The entire event was basically 6 hours long, which isn’t bad at all. Considering 6 hours at any comic con usually will get your through about 30% of the event. Not only was the timing and scheduling presented in a digestible flow, but the actual events were spaced out very well. We didn’t get three major panels in a row (for example: WW84, Suicide Squad and Aquaman) consecutively. They were all properly spaced out started and ended with a the two biggest ones, WW84 (to start) and The Batman (to end).

The big key was them stretching it out to another day. Had they tried to do it all in one day, as originally planned, it would have been too much. I don’t know if even the biggest of fans would be able to do 12 to 24 hours straight of this. Stretching it out and adding another day adds to the anticipation and excitement. Plus, it builds great momentum for the next one.

Another key in adding the event for Sunday, September 13 is that it adds some breathing room for the next one. Three weeks is a perfect timeline. Not too long of a wait, but also not immediate. They will still be talking about this event right as the next one will be coming around, so the flow and follow-up will seem connected. There are many talking points to come out of this one so it’s only right to maximize on the buzz and then create a next wave of it for the September event.

DC FanDome has to be labeled a success. I mean simply based on the reports of the 22 million views that it drew. For it to be accessible all over the world and from the comfort of home, without having to be part of a mass gathering, that in itself is a major success.

What it also accomplished is proof that we can hold these massive comic con events that were previously unfathomable to be done virtually. We can stay safe and continue to be part of these mainstream events until it’s safe to go back to the large convention centers and enjoy them live. It also allows us to have an option for future events of this realm. We are all able to see them now. Don’t have to be in a specific location or flock to San Diego for a Comic Con.

The best and most underrated part about this event is that it saved a LOT of $$$ for all of us who would have otherwise planned to attend a comic con. It cost ZERO dollars. I’m sure it was fairly costly to put on this event for DC, but the fans didn’t have to worry about any monetary investment. That’s huge in times like these with lack of work, furloughs and layoffs. Big thanks to DC for the foresight to put on this event and invite everyone to it.

FanDome is a definitive game-changer. It’s an example of a new approach and ways to do something that was so synonymous with in-person interaction. DC did good by many people and also achieved a massive boost to their brand. What an amazing publicity opportunity. For them to be only representing their own brand and not sharing the spotlight, as they would have had to at Comic Con is a major success for them. They had the world, literally, buzzing about the DC brand and trending worldwide. Tons of media attention for the entire weekend.

Finally, did FanDome achieve what it set out to? Yes, on many if not all accounts. Did it step up and close the gap with the ever powerful Marvel? Yes they did! From my perspective DC feels as relevant as they have ever been. With Marvel having the backing of Disney and their Disney+ platform, DC had to do something major, and they did. HBO Max was a big boost with the potential of tons of spin-off DC shows and originals, plus the highly anticipated Snyder Cut of the Justice League.

The content that DC is creating is at an all-time best. There were so many negative views and lack of belief in the DC brand, how they could never be on the level with Marvel. Well folks, now they are in the ballgame and have some serious superpowers behind them.

Enter the new Batman Universe with Snyder and Reeves and the potential of three, if not more, Batman’s in Pattinson, Ben Affleck and Michael Keaton. The follow-up movies to the successful Wonder Woman and Aquaman. James Gunn’s newly constructed Suicide Squad, plus two very impressive looking video games. Oh and the DC’s TV multiverse is thriving and adding new shows.

If DC FanDone (#1) was a preview then FanDome part 2 can only take things to the next level. For a DC lover such as myself, I’m all about this. September 13th, can’t come soon enough.

It’s a fierce battle of the best superheroes is upon us. The DC multiverse feels as exciting as ever. Marvel just got the memo. Thing are about to get very real and competitive.

For more information and to make a schedule, check out the DC FanDome website.

Previous post Conversation with Anne Heche and Thomas Jane: The Fun Couple Proclaim Their Love For Each Other

Next post Conversation with ‘House of Cardin’ Filmmakers: On Cardin Being a Visionary and What Makes Him and His Fashion Unique