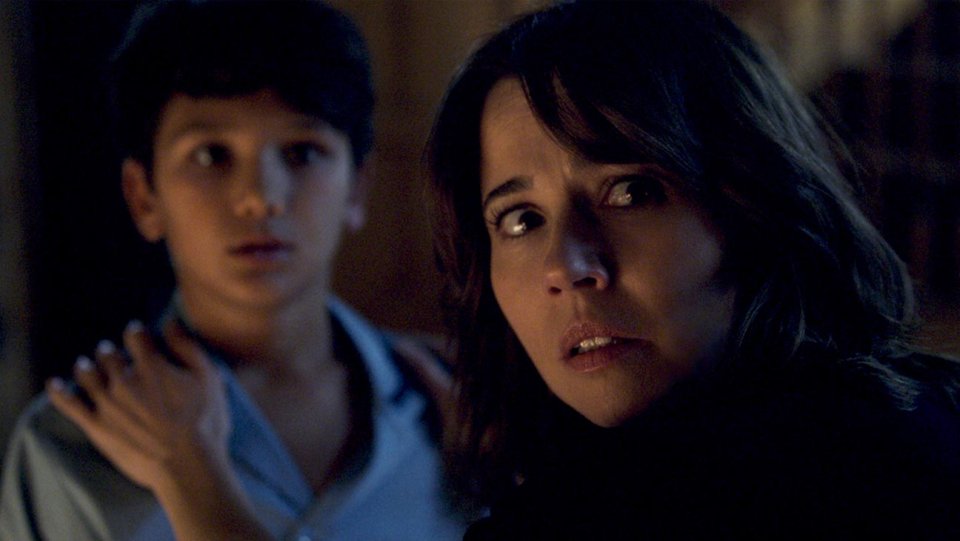 If you didn’t grow up hearing and being terrified of La Llorona, you’re about to hear a lot about her. In Mexican folktales, “The Weeping Woman” aka La Llorona, is a ghost woman appearing in a white dress that legend claims drowned her children in a river and now cries while looking for them. Children are told to obey their parents or you know who will come after them. So there is that. Now the world will be made known of her through the latest film, The Curse of La Llorona.

Is La Llorona to be feared? How does the movie stack up? Does horror master James Wan have another hit on hand with this film? Check out my full breakdown and get the answers.

Aside from the description of La Llorona above, in the movie she has a hounding Anna Tate-Garcia’s children (Linda Cardellini), Chris (Roman Christou) and Samantha (Jaynee-Lynne Kinchen). Anna is a social worker and when one of her cases takes a tragic turn, La Llorona is unleashed on her and her children. Anna must figure out what’s causing the unrest in her kids, before it’s too late.

Pretty straightforward plot that actually takes time to develop and isn’t rushed. Anna’s backstory is covered. We learn that she’s a single mother that lost her husband, who was a police officer. She’s juggling her career as a social worker while trying to raise her young children. It’s a difficult time in Anna’s life, and that’s well before La Llorona shows up.

If there is one thing that’s noticeable is that the actors really committed to their roles. Cardellini, usually known for her comedic and dramatic roles turns into a scream queen for this role. She depicts the nurturing and caring motherly side. She’s a fierce protector of her family.

The kids are a vital part of this story, so naturally the plot revolves a lot around them. Both Christou and Kinchen do nice workin conveying fear and intellect. La Llorona is seen through their eyes, so they have to translate the fear and intimidation, and they do it.

The big key to a horror movie is the look and sound. Bad sound and visuals tend to bring down the entire film. Good news for La Llorona is that modern day horror mastermind James Wan and his team are behind this production. Wan has an innate sense for style and mood in horror.

It very much feels like a Wan movie, due to the lighting and camera shots. There are a few noticeable stylized camera moves. One of those is quick zoomed out shot from inside the house to the outside when the door is opened. The quick twitch camera and lighting tricks really work.

Even though Wan is firmly behind this film as executive producer, La Llorona is directed by up-and-coming filmmaker Michael Chaves. Even though Chaves has a limited amount of credits to his name, it’s still clear why Wan pegged him as his protege to helm this movie. Chaves guides this movie visually and narratively. The story is the focus and the family is at the center of it. Chaves is patient and sprinkles the spooky parts throughout, but leaves the best for the final act.

Set wise, major credit goes to production designer Melanie Jones, who visually recreates the look of the early 1970’s. The 70’s are represented from the look of the police cars and bellbottom jeans that we see Anna wearing. Most importantly the house that the family lives in has a peaceful look to it, but with creepy elements in it, such as the green wallpaper. It’s not a haunted house movie, even though a significant part of the story takes place in it.

The entertainment factor is there, although you might have to be patient early on. The story isn’t rushed, so you don’t get to see La Llorona early on, which is a good thing. It definitely has the Wan flair and is fitting of the movies in the Conjuring universe, however, it’s not to the level of The Conjuring.

La Llorona is worthy of some genuine jolts and screams. The La Llorona character does look creepy. The white dress and the black tears are a nice touch to instill some goosebumps.

There are a few puzzling moments, don’t don’t fully add up and are left unanswered. Such as why can’t La Llorona get to the kids when they are locked in a closet? My main question was how does Rafael Olvera (Cruz) have all the tools and accessories to combat the supernatural force that is La Llorona? How does he know what will destroy her when he’s never even come to face her?

If you’re a fan of the Conjuring universe, this is well worth a watch. It’s a fresh new horror story and character, even if you grew up hearing about La Llorona, it still hasn’t been showcased on-screen. Horror should be fun, which this movie is. It’s a potential franchise starter also. La Llorona has been scaring children for years, now we’re all in her path.