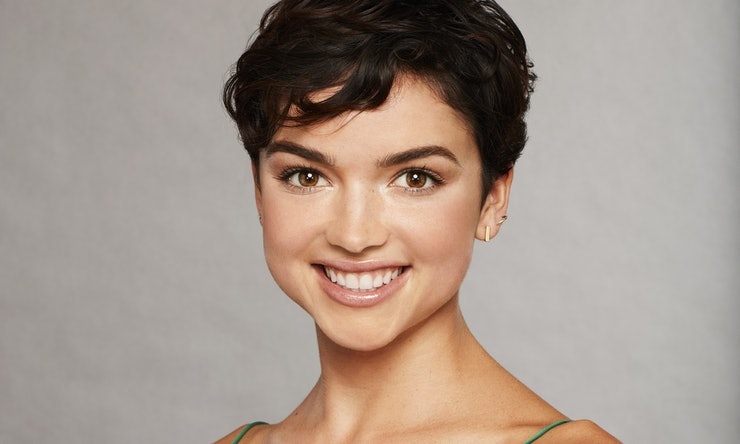 Fun On The Lake

Things get rolling with some gossip. Bekah M. is the subject and her age is the topic. Ageism at its finest. Can this non-mystery be finally put the rest. So she’s barely over 20-years-old. We know Arie has some fetish for pixie cuts and young women.

Chris Harrison barges in with a surprise notice that Arie has left for Lake Tahoe (good, keep him there) and the women will be joining him there.

The women discover their taxidermy ridden cabins, a.k.a Kendall’s paradise. Sienne doesn’t get to enjoy the cabin, as she gets a solo date with Arie. The date is parasailing, which shocks Sienne, whose never been to Tahoe. Well she won’t be hard to please. Arie promises Sienne some sweet nothing, she buys it, so as I said, doesn’t take much to impress her.

Meanwhile Maquel learns that her grandpa passed away.

The women learn they are going on a group date.

At their dinner date, Sienne announces that she’s very impressed with Arie’s winking skills. Her standards are dropping by a second. I’m convinced that this girl would be over the moon with a McDonald’s date, much less a fancy dinner. I’d even teach her how to whistle, imagine how impressed she’d be with that?! Sienne has never had a love story, so Arie decides that he will provide her with a date rose and take her to an obligatory dance, performed by “Lanco,” whoever they are?

The group date hiking among bears turns into a promise from Jenna that she is willing to drink Arie’s pee, insert eye roll and barf emoji. Arie missed the memo because he’s eating some bugs. How romantic is all this? A hiking competition splits the women in teams of three. The red team with Chelsea, Brittany and Marikh is lost immediately. Give these women some morse code signals. Team Arie make it to the oasis first. The most shocking moment of the season arrives when Arie takes his shirt off for a blink of an eye.

After the date, Arie “steals” Lauren B. and wants to chat with her. She admits that she’s not one to open up. Well, news flash Lauren B., there are about ten more Lauren’s in the house who will open up. Kendall will open up though, mainly about taxidermy, but Arie just wants to make out with her, so he will keep her around for that and the potential she casts him in something.

With all the waiting around Krystal learned the meaning of the word “ostracized”. So she goes to pout to Arie about it. The women can’t bear Krystal, but they are there for Arie, unfortunately Arie is only there for Krystal and Bekah mainly. Tia has trouble understanding the process, girl, just take the advice of Philadelphia 76er Joel Embiid and “Trust The Process”. Stick with it and take your date rose that Arie just gave you and run before he changes his mind.

Young Bekah M. gets a solo date with Arie. They start out with some horseback riding. They end up jumping in a small tub in the woods, once again shirtless Arie, can we stop with this? Overdone already and the episode is barely halfway through. To make matters worse, he starts sharing boring racing stories of the past. Snooze fest.

The dinner date with Bekah is about to get going and the apparent moment of truth is inevitable. Bekah brings up the topic of transparency…LOL. Bekah laughs at Arie’s concert that she wouldn’t be ready for “that step”. Joke’s on Arie. The age question comes up and Arie gasps with a smile. Creepy old man. Bekah does all the backtracking she has to do to keep her around. The puppy eyes gaze and a little smart ass reassurance convinces him enough to give her the rose, which he does. Smiley Bekah wins the staring contest.

Rose Ceremony prep time sees yet another arrival of Chris Harrison who announces Arie has made up his mind with who he’s picking and sending home. First rose goes to….never mind. Krystal stops him in his track and asks for a private moment with him. Krystal wastes more time talking about nonsense.

Back to the roses. Lauren B. gets the first one. Kendall. Ashley? Becca K., Chelsea, Jenna “Margot Robbie” Cooper, Jacqueline? Marikh and the final rose to Krystal. Caroline can sell lots of houses now that she’s being sent packing. What a huge mistake. She’d be a finalist if I was The Bachelor, which I should be. Cute Brittany T. is also heading home.

For more content on The Bachelor check out TheBachelorUniverse