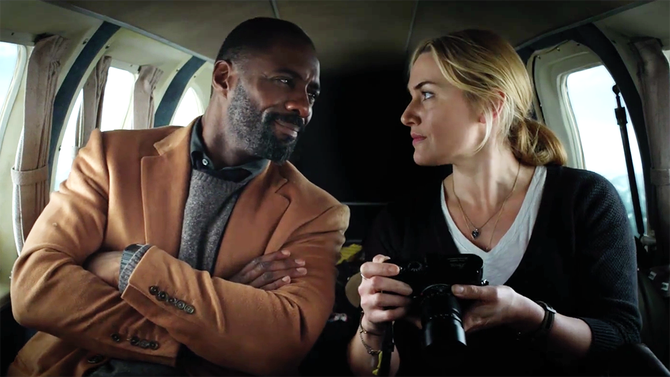 So Idris Elba and Kate Winslet are stuck together in isolation. There are far many worse scenarios than that one. The Mountain Between Us is a tale of two films. First half it plays like a survival adventure thriller, while the second half turns into a sappy romantic drama. While it certainly doesn’t lack on corny moments, there are some good ones also. Onto the full breakdown.

Two strangers come together at the airport to try to catch a flight neither can miss. Who happen to be these people? Well, it’s Elba and Winslet. Elba plays a brain surgeon named Ben Bass, while Winslet is Alex Martin, a photographer. Bass has an important surgery to perform and Martin needs to get back home for her wedding! Clearly the stakes are high for these two. Desperate times call for desperate measures so Martin comes up with a great, and by great I mean horrible idea, to enlist a retired local pilot to take her and Bass to their destination. She happens to overlook the fact that they traveling on a measly little personal plane. You know those that are a flying crash hazard. To make matters worse they are traveling through the Colorado Rocky Mountains.

Of course the plane doesn’t make it and they survive the crash. The pilot doesn’t, but Bass, Martin and the pilots dog do. It’s up to them to try to survive the dangers of the mountain wilderness, with no help in sight. Of course a romance brews between them as they fight to survive.

Majority of this movie just consists of Elba and Winslet. It’s a two person show, and the dog. Winslet and Elba are terrific actors, there is no doubt about that. They turn in fine performances in this movie, but the scrip is somewhat limiting. Too many cheesy lines and director Hany Abu-Assad doesn’t help them out with character direction.

What makes Elba so good at what he does is that he can play the intimidating badass cool guy just as well as the soft gentle and caring one. In this film it’s the latter, and he’s just fine doing it. Elba sells you on the fact that Bass is going through inner struggles that he’s hiding from Martin due to the greater purpose of helping them survive. He’s very much the tough guy also. All this toughness and sensitivity takes away a bit of luster from Winslet’s character who is a is portrayed as a damsel in distress that wouldn’t survive a minute without the constant help from Bass. I wish both characters were better balanced where they aide another, and not just having Martin’s mere presence as the main motivation for Bass to move mountains for (no pun intended).

Once the characters connect, Winslet and Elba do a good job making the romance feel genuine and authentic.

Since it all takes place on an isolated snow covered mountain, the visuals are a big part of telling the story and relating to the characters. The mountains look grand. The sounds tip-off the incoming dangers the characters are facing. As you’d expect in a movie where the elements and setting plays as a character itself, the mountain is intimidating and looks every part of the danger it presents. The sound goes along with it, with the addition of a frequent scream and dog bark.

Even thought the movie doesn’t have a completely seamless transition from the action adventure to the romance, both parts do have their ways of entertaining. As much of a sucker as I am for anything romance, the first half of the movie where the characters are trying to navigate through the mountain and survive is a lot more exciting. The romance between them is inevitable from the start, and I mean from the moment they enter the airport and before they speak.

I couldn’t happen but wonder how they actually survived and had the stamina with no food in sight. More importantly how did the dog survive and what was he eating throughout. Yes, you’d see them occasionally snacking on ancient stale soup they find or a cookie, but still. There are quite a few inexplicable moments throughout the movie that makes you wonder how they are surviving?

When it gets to the end, it really gets cliche. Had the movie made one turn in the unexpected direction, it would have made it a lot more credible and intriguing. It stayed safe, so the result is a bit bland and predictable.

Elba and Winslet are worth the buy. They are very likable actors and can make something out of nothing. Romantics such as myself will find good things about it also. It is intriguing, even if it’s early on, but you still wonder if these characters will make it to the end. Can’t help but also wonder if the dog makes it with them. It’s entertaining enough to give it a chance.

The two halves of the film aren’t fluidly connected, even thought it sets up for the inevitable. Speaking of which it’s ultimately fairly predictable. The few twists instilled don’t pay off. The movie drags on a bit longer than it should. The script is mediocre at best. Luckily the strong actors make something of the bland characters and the dialogue.

The Mountain Between Us has an audience. Even if it’s not a large one, it still caters to the romantics, Elba and Winslet fans and the adventurers who enjoy movies with a perceived high tension and heavy obstacles. In the end it’s just okay.

Next post Must See Movies Of The Week (Oct 3)