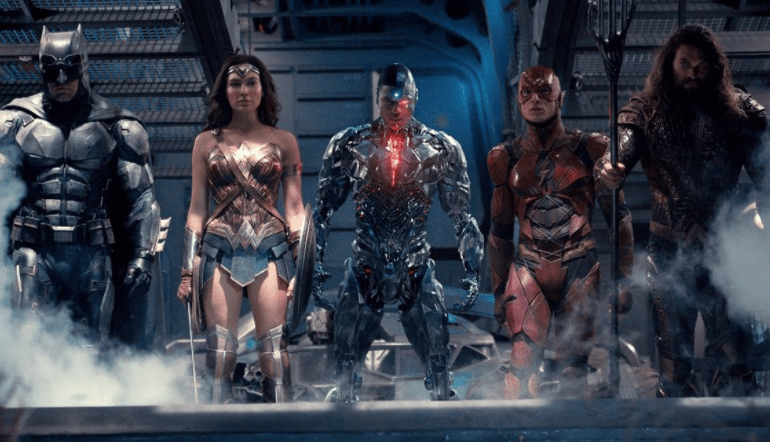 There it was, the first major Justice League trailer dropped over the weekend. I actually was at the Chicago “Walker Stalker/Heroes and Villains” comic con when it happened and watched it with David Mazouz (Bruce Wayne from GOTHAM). I asked him if he’s seen it, he said he didn’t know it released, so I pulled out my phone and we watched it together. More on that with my upcoming coverage of the comic con. So, what did we learn from this trailer? Check it out below and hear my thoughts:

Looks like Bruce Wayne is doing a lot of the legwork here, looking for “the others” all over the globe, including areas that appear to lack any sort of civilization. What the hell is Wonder Woman doing in the meantime? Is she hanging out at home watching Netflix? Get your fine booty off the couch and help the man out, Diana. Geez.

Next up, we see Aquaman, Cyborg and Flash in quick intros. I like Barry Allen questioning Bruce Wayne if he’s Batman. Kind of a fan moment there for another superhero that clearly looks up to Batman. Then it starts getting fun. We see all of them in action. The background is similar to the final battle in BvS, with the fire and smoke and the comic bookish look of destruction taking place in the background. Aquaman is throwing down that spear, but one thing to note is it appears Cyborg is shooting at The Flash? Does that mean they are feuding initially?

In the remainder we get a quick glimpse of Lois Lane, so that’s important she’s making an appearance. Batman does battle in his Batmobile. It ends with Commissioner Jim Gordon stating that it’s good to see Batman playing with others while Aquaman approaches them. The trailer ends with Aquaman hanging out on the top of the Batmobile.

It’s a fun trailer, but it doesn’t tells us much. Only clues we get is that some of these superheroes are fighting against each other, for example Cyborg and Flash are. Bruce Wayne is the one doing the recruiting, while Diana is doing whatever else. The sighting of Lois Lane may be a clue to Superman. This trailer is more guarded than most girls are on online dating, now that’s saying something. We got nothing on the villains, nothing on Superman, but instead they showed us the new characters skills and some humorous interaction between them. It’s basically a two and a half minute teaser. I think they learned their lesson after giving it all away in BvS. Less is more and leads to more anticipation.

Next post Review: “Me Before You” Is The New Romantic Movie Standard