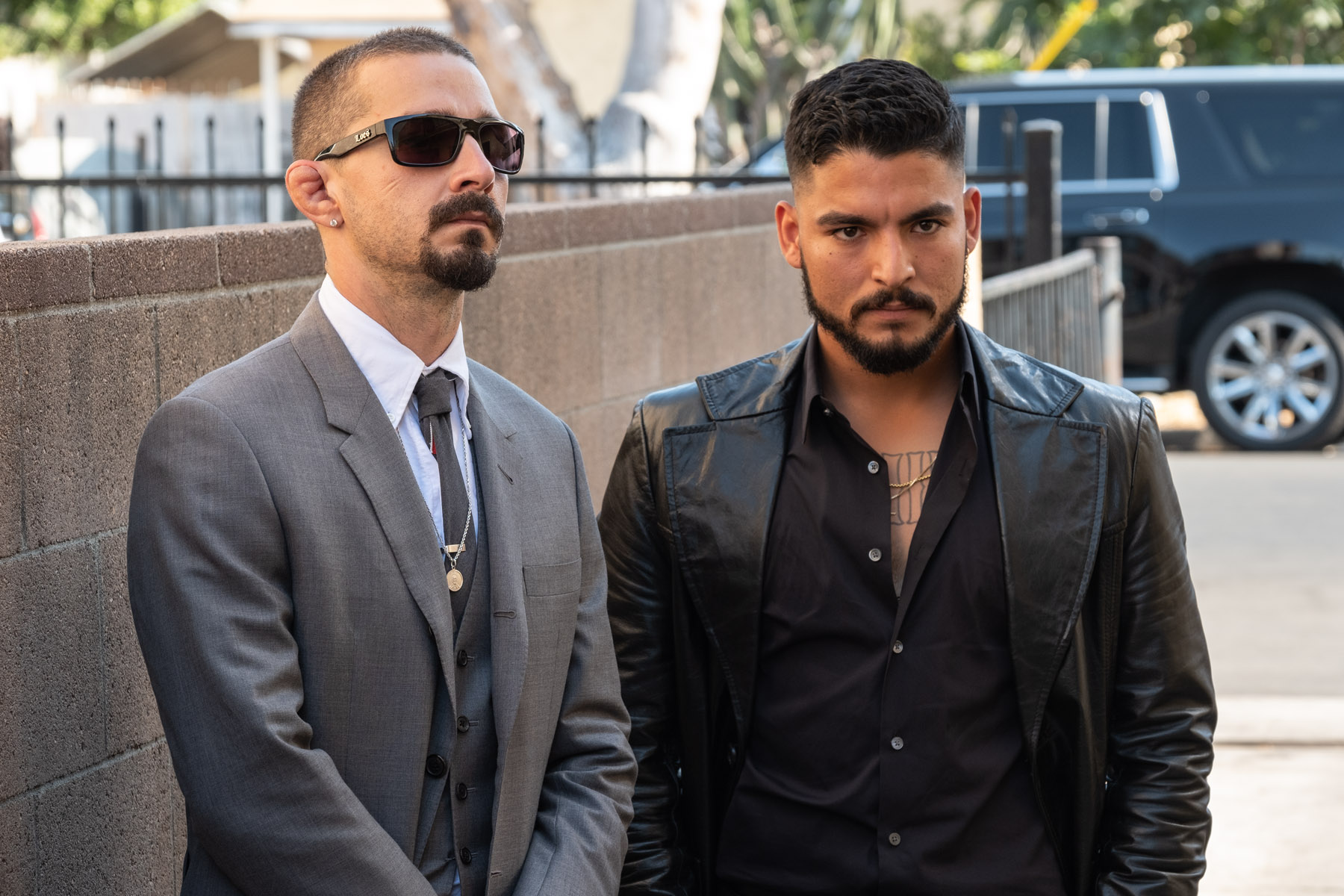 David Ayer is back. After a four year hiatus since the Suicide Squad (Training Day TV series aside) he returns with The Tax Collector. This is familiar territory for Ayer who has seemingly mastered the Los Angeles gangland stories. Does The Tax Collector measure up to his previous successes? Does it miss the mark? Is there more to the film than Shia LaBeouf’s publicized chest tattoos? I dig deeper into the movie with a full breakdown below.

If you’re a fan of Ayer’s work, you understand the setting. Rough Los Angeles neighborhoods filled with crime and hard nosed colorful characters. In The Tax Collector we are introduced to David (Bobby Soto) and his manically humorous sidekick Creeper (Shia LaBeouf). David and Creeper patrol the streets like a neighborhood watch, though for most, they won’t be pleased to see these two.

David and Creeper are neighborhood “tax collectors,” aka the guys that make sure the biggest and baddest gangs make their payments. While they are the bosses in the streets, they work for a crime lord that we rarely get to see or hear (it becomes apparent at the end of the film why that is).

Trouble arises when David’s livelihood and family life is threatened by a returning rival of his boss that’s back in the neighborhood. Are Creeper and Dave able to take back control of the streets and rid of the new guy on the block? Is their run about to come to an abrupt end? That’s the main question the story poses. I won’t spoil the rest, but it’s a wild and explosive ride.

This movie and genre is right up my alley. I enjoy the drama and adrenaline that these gangster movies provide. When it comes to Ayer it’s different than with other filmmakers. There is a sense and feel of genuine authenticity that his Los Angeles street gang dramas have. If you read up on Ayer you’ll find out he grow up in South Central LA so that’s where the relatability and authenticity must stem from.

If I’m comparing it to some of Ayers previous work of this genre, such as the critically acclaimed End of Watch and the vastly underrated and terrific Harsh Times, then The Tax Collector is worthy of standing alongside those films.

He keeps the formula intact, but doesn’t necessarily add any new elements. It still works when the formula is right. Ayer’s movies might display the gang warfare on the surface of the plot, but it always comes down to “la familia”. That’s where the heart of his films lead to. Not to mention his affinity to depict the gun-trotting buddy tropes.

The movie starts out fast and furious (no pun intended) then it slows down in the middle, only to pick up steam in the final act. We enter David’s world where he’s “the man” in the street biz. There is no backstory on how he rose to power in the hood or how his friendship with Creeper developed. The character history is not necessary in how the plot unveils, but it would have added an important aspect to the depth of these characters.

I liked the pacing of the film, but in the second half Ayer goes for flair over substance. The slow-mo shootout makes an appearance. As neat as it looks and is a throwback to his past films, the “cool” reaction misses the mark in terms of the already established tone. Throwing in special effects like the slow motion felt off and took away from the more bleak reality based nature of the film. I could have done away with it in favor of continuity.

Aesthetically the film looks just as it should with darker gloomy tones and a brooding sense. Ayer knows the genre well and doesn’t stray from delivering a visual that worked in his previous films. To my surprise, majority of the action takes place in broad daylight. It’s a nice change of pace from the usual darkness of night that gangster films are naturally linked with.

Now this is my favorite part to talk about. Shia LaBeouf will be portrayed as the star on the marquee and in the media, but this is Bobby Soto’s film. He’s the lead and the story is centered around him. LaBeouf plays a fantastic sidekick and a great Robin to the lesser known Batman in Soto.

For those that don’t know of Soto this is the leading role that will get him notoriety. I’ve been a fan of his work since I saw him in The Quarry in a supporting role that he stole every scene he was involved in. Soto has a great look and has unique screen presence and intensity that he brings to his roles. He’s can play the guy who you’ll trust your kids and family with and the one that you’d never want to come across on the street, he blends both characteristics so well, as he does in this film. I’m a big Soto fan. This film and role is his official arrival.

LaBeouf has had one of the most surprising career transformations. He known a just a fast-talking wise ass kid from the Transformers movies. So how did he become one of the great method actors around? LaBeouf has had a very impressive run the last five years, transforming physically and emotionally for his roles. Now he’s on a Christian Bale trajectory. That’s high praise for a guy who almost fell out of the industry due to his on and off set behavior.

LaBeouf has been already subject to controversy online due to him playing a Chicano. There is a fair case to be made that a Hispanic actor should have been cast for the role of Creeper. I’ll make a case why Shia was the right casting and it’s an easy case to make.

The man completely immerses himself in the role. Cauliflower ears and the infamous chest tattoos aside, he genuine commits himself to the character. Granted, there are some holes in his portrayal such as the inconsistent Latino accent that he seems to go in and out of. Not sure if it was on purpose on not, but it’s noticeable. That aside, he’s so damn compelling in the role that it feels wrong to poke at it.

The supporting actors make an impact also. Funnyman George Lopez is anything but funny (in a good way), as he plays a crime boss and uncle to David. This is the hardass dramatic version of Lopez that we aren’t accustomed to seeing. Good work.

The wildcard goes to Cinthya Carmona (TV’s Deputy) who plays David’s wife Alex. She’s the rock of their family and a badass tough woman. Carmona delivers in her biggest role yet. I believed in the relationship and connection between David and Alex and certainly Soto and Carmona had good on-screen chemistry. I expect her to start appearing in a lot more films.

If it’s an Ayer production, I’ll be there for it. I enjoy his method of storytelling and this genre is what he excels at. The Tax Collector isn’t a perfect movie by any means, but it’s entertaining and exciting with a lot of drama and action. It’s high on intensity and the tension packed moments. Not everyone survives so you’ll be left on edge with surprise and intrigue as I was.

The performances are very good. Shia is worth the experience. Soto is a star in the making and there might be some hope for a Tax Collector sequel, prequel or a franchise.

It’s a pretty easy decision that The Tax Collector is worth checking out. The rawness of the characters and the story brings you a side of LA that many don’t hear about, but it’s a reality. Ayer includes a part of his past with his films and The Tax Collector continues to depict Ayer’s feelings and truth about South Central Los Angeles that he grew up in. Collect your friends together and strap in for the wild and intense ride that is The Tax Collector.

RELEASE DATE: August 7, 2020 in Theaters, Digital and On Demand

‘THE TAX COLLECTOR’ releases in Theaters, On Demand and Digital on August 7, 2020

Previous post ‘300’ Releasing in 4K for the First Time Ever