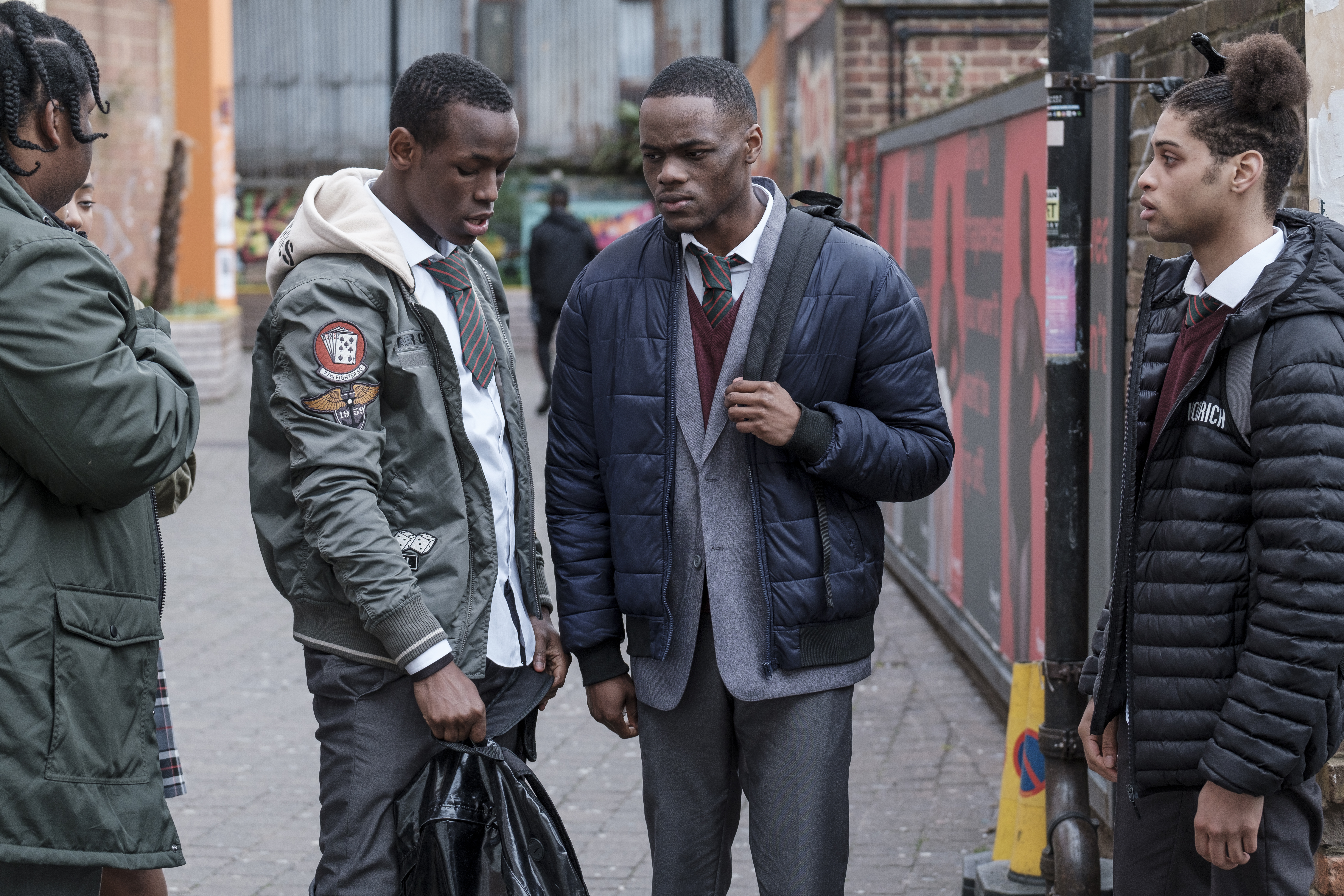 Blue Story is a story that many wouldn’t know or understand, unless you lived it. It’s a story that sheds a light on the real events that take place daily in the neighborhoods of London, England. Written and directed by United Kingdom’s rapping sensation, Rapman. Does Rapman’s YouTube inspired series translate better into a movie form? Do the stories of rugged London neighborhoods translate on a international scale? Find out in the full review, below.

Set in the rough streets of London, is a tale of friendship and love surrounded by tragedy. The main characters in the film are Timmy (Stephen Odubola) and Marco (Micheal Ward). Timmy is a quiet, shy and a bright kid that befriends the rebellious, streetsmart and charming Marco at the local school they attend in Peckham.

Both boys come from different sides of town, but strike up a quick friendship. Everything is fine until street gang warfare pits them against each other. The boys have to pick opposite gangs in a battle they might not survive.

This movie is Rapman’s experience and creation. Initially I found it a bit difficult to get into and grasp it. Once I got with the flow it wasn’t an issue and found it to be full of intrigue. Movies like Blue Story are usually made focused on America and the gang activity in big cities such as New York, Chicago and Los Angeles. It was refreshing and eye-opening to be exposed to a familiar story, but one based in another country and neighborhoods you don’t recognize and know of. This movie provides that outside perspective, especially to anyone that’s not local to London.

Rapman inserts his style and flavor into the movie by rapping to several scenes in the story. It’s done in an interesting way, where it almost pauses the movie and he becomes a narrator with his lyrics. It’s not something I can remember seeing often in movies, so it was a bit startling and took some time to get used to. Interesting aspect, but it takes time to warm up to it since it interrupts and inserts itself at several important plot points in the movie.

It’s a story of love and how miscommunication leads to tragedy. What I took away is that if we just talk to each other, so much harm and hurt can be avoided. This is the central statement that Rapman makes. We might come from different backgrounds and sides of town, but we have things in common. Friendships and relationships can be formed, even if it doesn’t appear fitting on the surface.

I’ll be honest, I had no idea who these actors were or what they had done, they were virtual unknowns to me. The leads, Odubola, Ward and Karla-Simone Spence are fairly unknown British actors with limited amount of credits. To their credit, they did a fantastic job in the movie and came off as legitimate pros.

It was hard to grasp the fast-talking nature of the actors/characters combined with the English accents. I struggled for the first half hour of the movie till I eased into it, and then it was smooth sailing. It can be jarring to an non-Brit initially, and hard to follow the dialogue.

Individually, the romance between Timmy and Leah (Spence) is so genuine and sweet. The actors made it feel relatable to the point you root for them as soon as they go on their first date, which is a heck of a fun scene in itself. Odubola and Spence had real good on-screen chemistry. I really enjoyed the performances from each of them.

If Timmy is the perceived good guy, then Marco would naturally be the villain. He’s tough and certainly has bully qualities and tendencies, but Ward’s performance is real good, so I found it at times to be difficult to root against him. I appreciated his commitment to the role and how he handled it.

I definitely recommend Blue Story. It’s not an “American” film, it certainly feels European in the presentation and storytelling, plus it’s intimate on several levels from performances to the setting. I have no idea what it’s like to be in the shoes of these characters and be part of the lives they live, but I certainly got a feel and understanding of what it takes to grow up in those though hard-nosed London boroughs.

Blue Story is raw and gritty. It doesn’t hold back. It’s the authenticity of the story and characters that stand out. At times it felt like a documentary. The loss felt real and so did the violence. I felt connected to the characters and rooting for them, especially Timmy and Leah. Unfortunately as true to life not all of them make it to the end of this film. I found myself hoping these people would open up their eyes and just talk. Couldn’t they just talk and stop all the unnecessary violence from destructing their lives and those of the ones closest to them?!

I was skeptical initially, but by the end I became a believer. Rapman delivered a powerful story of brotherhood that’s ruined by the self-established laws and misguided beliefs of the people who rule the streets. It’s a Romeo and Juliet story that’s set in urban London neighborhoods. It also can be characterized as a modern West Side Story for our current times.

You will be entertained by the violent nature of the drama that plays out. You will also feel kinda empty when it ends. People aren’t always who you think they are and want them to be. Nobody really wins these street wars is the moral of this Blue Story.

RELEASE: May 5, 2020 (Available on Digital for rent and purchase)