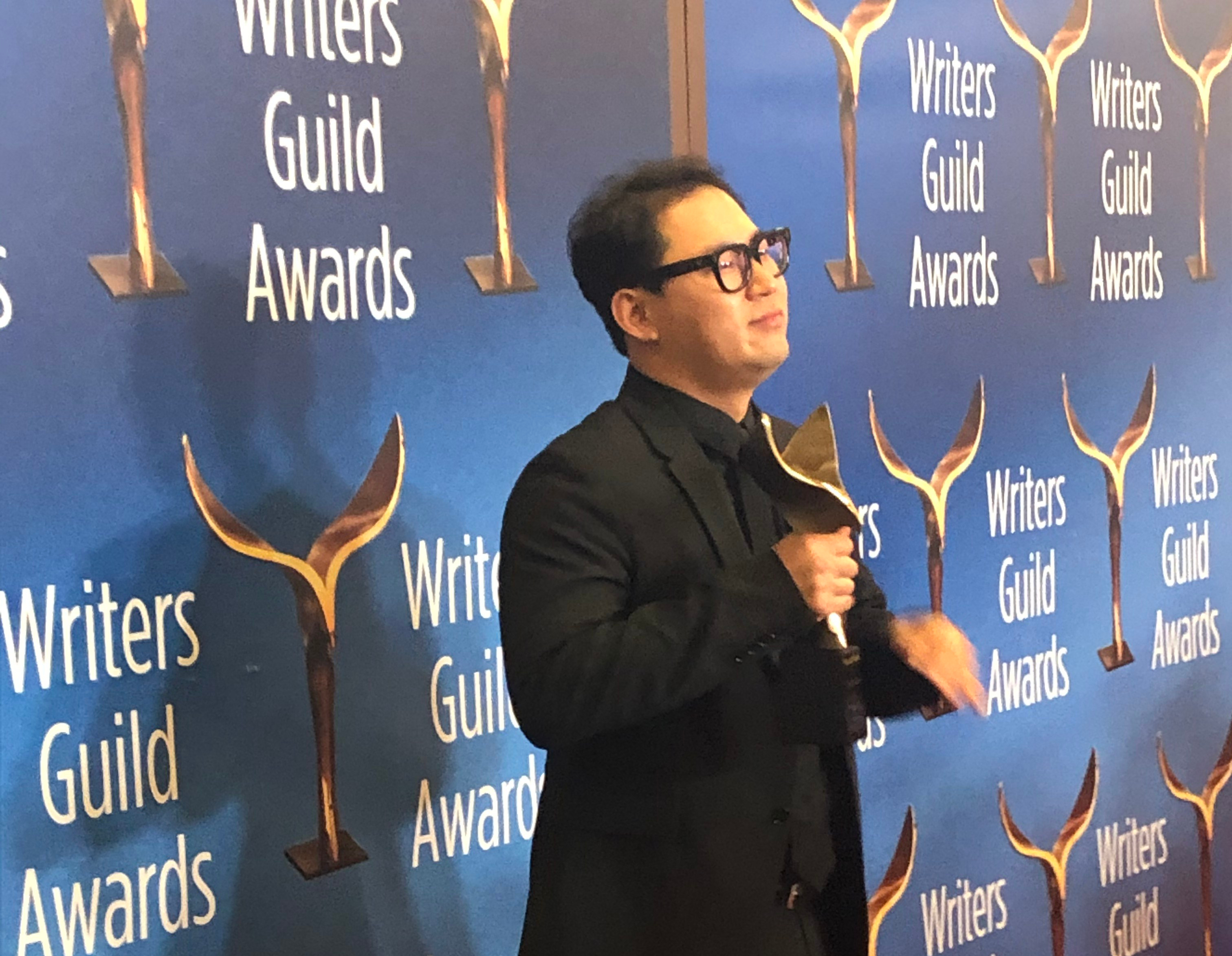 The 2020 Writers Guild Awards (West) was held at the Beverly Hilton in Beverly Hills, CA on February 1, 2020. I was fortunate to be on hand to cover the show. Many of the finest writers and showrunners walked the red carpet before the show.

I found Jin to be very humble with a charming personality. Even though he had a translator with him, I could see his personality shine through. Very pleasant individual. I was glad I could ask him about the violence in the film, that was one of my big pressing questions I had watching the movie. That aspect certainly caught me by surprise while watching. Hard to believe this was his first ever script. Unreal talent.

Charles seemed like a really nice guy. Very enjoyable to chat with. I appreciated him describing in depth the reasoning why the movie had that specific style of breaking the fourth wall. He’s a super talented screenwriter. I was a huge fan of The Big Short. I have to rewatch the movie now and see it again knowing the intended point-of-view that Charles explained they made it with.

It was super cool catching up with Nina and John. They seemed to remember me from when I interviewed them at the Nancy Drew premiere. They are great to talk to. Once again some good insight from them, this time about the fantastic work they do on The Handmaid’s Tale.

Tom was joined by his lovely wife Andi Matheny (who is an actress) and they both were very engaging and nice. I had no idea about the Togo story. I was familiar with Balto, but didn’t know Togo was the one that the locals have recognized. I’m definitely gonna check out the film on Disney Plus.

I haven’t seen the show, but Max sure did a good job describing it and making it sound appealing for me to check it out. Max is a very accomplished guy. He’s the man behind the recent Godzilla movies and the anticipated upcoming Godzilla vs Kong. Excited to see it.

Twice in one night, pretty good opportunity to talk to the man behind the most talked about movie of the year. This time I had a chance to ask Jin about his favorite character he wrote for the movie. It was interesting to hear that he was most excited to write Ki Taek, played by Song Kang Ho. Personal highlight was him giving me the approval on my jacked! Ha.

Jonathan was cool. He gave some interesting and thoughtful responses in regards to the shows fanbase. Jonathan spoke about how the show attempts to humanize and make this characters flawed and relatable, even though characters that are elitists and perceived billionaires aren’t the most likeable kind of characters. He was rightfully cautious about not revealing any spoilers for the show.

Alec and Bill Hader are the creative masterminds behind Barry. Alec spoke about the character presentation and arc planning. Since he’s the co-creator of a show that’s wildly popular, I was curious to know how much influence do fans have on the story arc of the show. Interesting response in that he said they don’t factor in. It makes sense, because they need to plan a show to make it long-lasting and outside influence could get it off-the-rails.

A Beautiful Day in the Neighborhood, Written by Micah Fitzerman-Blue & Noah Harpster, Inspired by the Article “Can You Say…Hero?” by Tom Junod; TriStar Pictures

The Irishman, Screenplay by Steven Zaillian, Based upon the Book I Heard You Paint Houses by Charles Brandt; Netflix

Little Women, Screenplay by Greta Gerwig, Based on the Novel by Louisa May Alcott; Sony Pictures

The Inventor: Out for Blood in Silicon Valley, Written by Alex Gibney; HBO Documentary Films – WINNER

“A Horse Walks Into A Rehab” (BoJack Horseman), Written by Elijah Aron; Netflix

“Our Little Island Girl” (This Is Us), Written by Eboni Freeman; NBC

“Here’s Where We Get Off” (Orange Is the New Black), Written by Jenji Kohan; Netflix

“Nice Knowing You” (Living With Yourself), Written by Timothy Greenberg; Netflix

“Pilot” (Dead to Me), Written by Liz Feldman; Netflix – WINNER

“Remember How This All Started?” (Family Reunion), Written by Meg DeLoatch; Netflix

DOCUMENTARY SCRIPT – OTHER THAN CURRENT EVENTS

“Chasing The Moon Part One: A Place Beyond The Sky” (American Experience), Written by Robert Stone; PBS

“A Gridiron of Their Own,” Written by Kelsey McKinney; Deadspin.com

“Stories About My Brother,” Written by Prachi Gupta, Jezebel.com – WINNER

“Woodstock: Back to the Garden,” Written by Gail Lee, CBS News Radio

For more on the WGA and the award show, visit their website