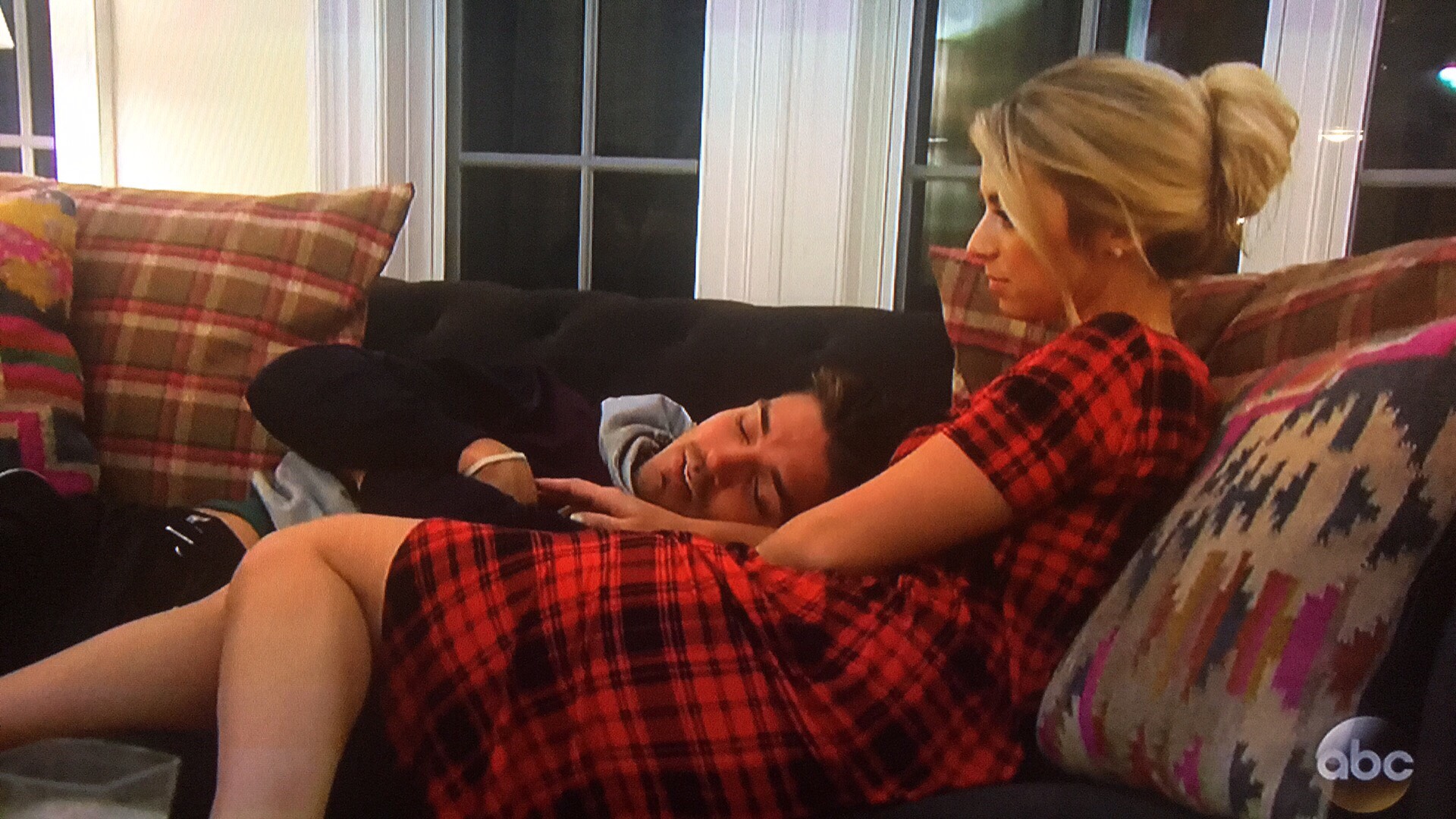 The Benoit-Clare-Christian love triangle continues. Luke connects with Stassi about their ailing hearts, no seriously, they both have had heart issues.

Time for a game. Speed skating is the next event everyone is going to be failing at. Clare is so defenseless by Benoit’s niceness that she wouldn’t be able to pass on a date card from him. That’s the least of his worry and all the other guys who are having to deal with shrinkage. Now that’s a problem.

Broadcasting legend Hannah Storm is announcing this competition with Chris Harrison. Unfortunately for Hannah, her legend status has been revoked as soon as she appeared on this show. These two set sports commentary a few decades back. Mainly because of Harrison.

Kevin comes up with a novel idea that the guys might not be familiar with winter sports. No, really Sherlock?

All American final with the losers of the initial race. Great idea, considering they all are bad. Dean wins in a photo finish against Luke. Wow, how thrilling.

Post event Dean looks like he wants to use the date card on reporter Ashley Brewer. I know I would.

When the group returns home they discover Jordan in the house. Jordan is rumored to have flipped a coin on two women of his New Zealand season of The Bachelor.

He gets pressured into admitting that he flipped the coin on the girl he picked.

The exotic Stassi picks Luke to go on a date. Meanwhile conflicted Kevin is trying to change course and pursue desperate Ashley I., who is planning a wedding with him in her head.

Lesley shows some fortitude that Dean can’t and tells him to man up. Finally. He’s getting on thin ice (no pun intended) with her. He asks her on a date.

A new weird fad emerges when Clare and Lesley hang out in a bath tub in their clothes.

Luke throws his relationship with JoJo under the bus and says that his connection with Stassia is more emotional than with JoJo.

How and when did Bibiana and Jordan connect and start making out?

Benoit’s desperation is at an all-time low. He’s fallen in love with Clare and apparently the kiss meant everything to him, but not much to her. Just a friendly Clare kiss, that’s all. She rejects him and he decides he has no choice but to leave.

With one man left for Clare, it’s all about Christian now. She quickly can be out of options as Christian calls her out and gives her the business, the German way.

Kevin and Ashley are hitting it off, until, Aussie Tiffany comes around and starts crying.

Clare is requesting a translator for her and Christian. He doesn’t get why she’s pissed at him. Nobody in Germany makes a move on a woman when she shows interest in other men. That’s the Christian German rule folks.

Courtney hands out the first rose to Lilly. Luke gives his love to Stassi. Jordan gives his to Bibiana. Josiah and Ally still going strong. Dean and Lesley Murphy. Kevin hands his to Ashley I. Ben Higgins gives a rose to Yuki. Michael gives his rose to Tiffany. It all comes down to Christian. For all the talk Clare has done, she accepts the rose from Christian. Rebecca and Jenny are heading home.

In episode 2 they went away more from the winter games and focused more on the romance. Here are the take aways: