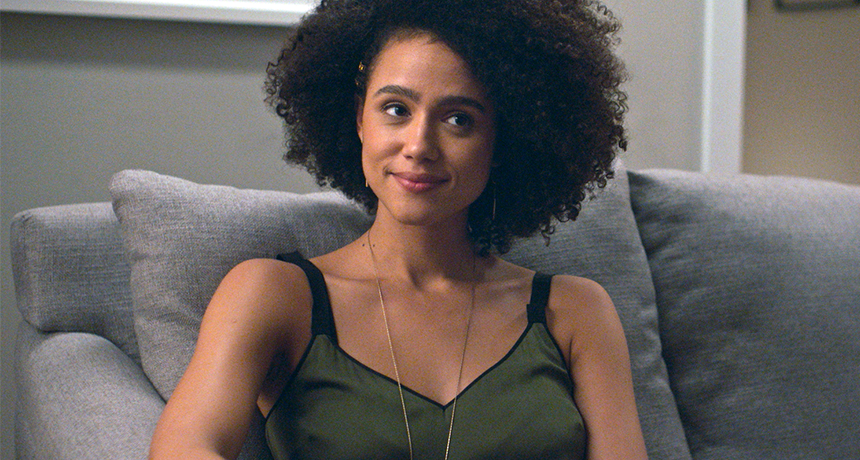 Hey everyone, Holly is coming over for the weekend, plan on a sleepover. Yes, sort of the plot point of the film. A married couple with a lack of spark in their love lives, but Holly might be able to change it, for the good or bad.

This charming and modern comedy from Joshua Friedlander features a talented cast with the likes of Nathalie Emmanuel (Game of Thrones), Ron Livingston, Josh Lawson, Erinn Hayes and Britt Lowel.

The story centers on Noel (Lawson) and Audra (Lowel), a couple who are lacking spice in their romantic life. Audra’s college friend Holly (Emmanuel) is visiting and will be staying with them. Sounds innocent, right? Sure, until Audra reveals to Noel that she and Holly had sex in college….multiple times.

This is a straightforward story. Don’t expect twists and turns, it just focuses on the characters and poses relationship questions. Is lust for someone else potentially helpful to an already established relationship?

I felt Friedlander shines a light on the importance of communication, especially in relationships. Another takeaway was that we still have human desires and fantasies, even if we are committed to someone, and it’s not necessarily bad to feel that way.

I enjoyed the actors in this film. A good group of talent that seems to be in a similar age bracket. Emmanuel is a well-rounded actress that’s also physically stunning and perfectly fitting to play Holly, who has everyone smitten for her.

I’ve been a fan of Lawson’s work. He recently appeared in Bombshell, so his career is definitely on the rise. Ron Livingston is a great get for this film. I enjoyed his performance. I wasn’t familiar with Lowel and Hayes, but I thought they did a solid job.

I found this film to be relatable, not that I’ve been involved in this scenario that the characters are, but also realistic. These are conversations and scenarios that some couples face. The dialogue is a little corny at times and too satirical, but it holds up in the big picture.

Holly Slept Over is fun and engaging. It certainly made me think what I’d do in this scenario that the characters are in. I’d probably go for it! Life is about experiences and and lessons. This film poses some scenarios that many will end up facing in some ways.

Overall, it’s a modern comedic romance for millenials. It’s not perfect by any means, but it’s awkward and funny, just enough to feel authentic. Check out this under-the-radar film that doesn’t use sex as a taboo or comedic act, but instead makes it a lot more comfortable to discuss and portray.

Next post Movie Pick of the Day: Queen & Slim