John McEnroe made a name for himself as foul mouthed athlete. An original of sorts. Björn Borg was a tennis legend that I wasn’t aware of prior to this film. Their epic 1980 Wimbledon final goes down as one of the greatest tennis matches ever. This movie is about to show us the events that lead up to this game of a lifetime and introduce us to the two men behind it. This play-by-play recap review will feature a complete breakdown of the movie, scene by scene. WARNING: This review contains all of the film’s spoilers and ending.

Close-up shots of these intense competitors, Borg played by Sverrir Gudnason and McEnroe by Shia LaBeouf (sporting a heck of a mullet). As Borg is about to start a serve, tosses the ball in the air and the screen fades to a few decades back where a teenage kid is hitting a ball against a wall. Young Borg is taking out his frustrations or pure boredom on that wall.

After that exhausting session, the next shot is of adult Borg looking down from a balcony at a swanky hotel in Monaco, staring down at the pool below. Borg resembles a rocker or wrestler with his long fancy locks. The guy must be bored since he’s doing pushups leaning on the balcony fence.

Looks like his lonesome behavior is warranted as he’s being asked for autographs and mobbed by screaming girls when he’s out walking in public. Ok, so Borg is somewhat popular on the streets of Monaco. He finds an empty bar and gets a coffee, only to realize he doesn’t even have the cash on him to pay for it. No money? No problem. Go carry some boxes for the bartender. Unfortunately for Borg he notices a newspaper with McEnroe’s face on it. Borg tries unsuccessfully to tell the bartender that he’s an electrician. Don’t ever try to fool the bartender.

Stateside, apparent bad boy McEnroe is on a talk show talking about his outbursts and upcoming Wimbledon competition. Loose cannon McEnroe storms out the talk show stage swearing and complaining about the mention of Borg, meanwhile Borg is having a subtle quiet fit about not having his superstitious items in order. A tale of two very different men is depicted.

Borg gets a meeting with his handlers who plan out his next few years for him. His girlfriend isn’t impressed. This guy has no sense of independence.

McEnroe is back at his hotel drawing a bracket on the wall of Wimbledon competitors as his mental prep, meanwhile Borg is loosing his mind with the thought he might not win Wimbledon for the fifth consecutive time.

Back to Borg’s childhood where more temper tantrums ensue, to the point we learn he was suspended from tennis competitions for six months. His fortunes seem to change when he meets Stellan Skarsgard, not the actual Stellan, even though that be cool, but Lennart Bergelin, the character Skarsgard plays.

Forward back to the present (1980, at least movie present) where Borg plays his first match, while McEnroe watches on from his hotel bed. He doesn’t stay there long as he heads out to party with his crew and groupies. One of the guys describes to McEnroe how compulsively superstitiously obsessed Borg is and breaks down all his innate routines. They should treat Borg to this experience, maybe that would take a little edge off him. Ok, who am I kidding. A robot with a missing battery would have more fun partying than Borg.

That leads us to the backstory of McEnroe. From his training to his mothers strict detail oriented quizzing of him while he’s getting his moppy hair, cut.

Time for McEnroe to have his match. Glued to the TV is Borg, analyzing every step McEnroe makes. I’m also glued to something, that being Borg’s hair. It’s even longer now. Someone call McEnroe’s mother to give this man a proper haircut. 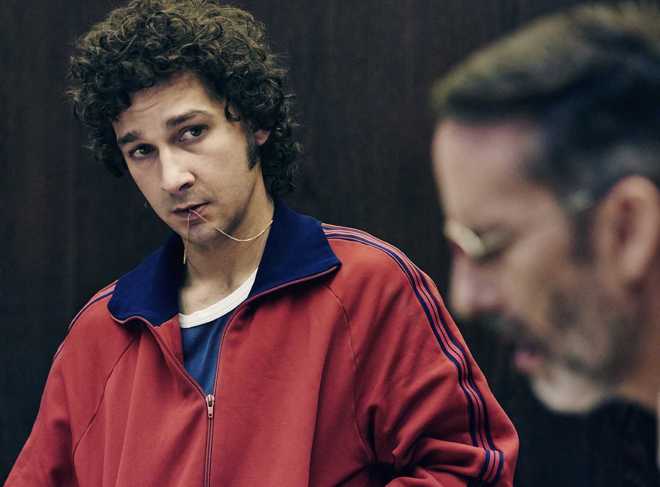 Back to another flashback. Teenage Borg getting coached up by Bergelin. By coaching I mean rouged up and tossed around, literally. As if he needed any more reasons to to have another outburst.

Back to present time. This movie is going back and forth in time more than a time machine could handle, much less your eyes and attention span. So now in the present, apparently Bergelin didn’t do a good job stringing the tennis racket, so for that he gets fired. Now it’s down to that poor angel of a woman that Borg is dating, having to deal with his manic demands.

The following flashback gives us the reason why Borg turned into an emotionless machine. Following that ass kicking he got from Bergelin, he was told never to show any emotion and to use all his emotion into the swing of the racket. This is how the inner monster was created then.

Time for McEnroe’s flashback to the past. Seems like he was coached up to be a math wiz. As he’s flooded with random math questions at a family dinner party.

The smart promotions folks are already strategizing and planning for the inevitable star showdown in the making between Borg and McEnroe. Johnny is doing his part with a f-bomb filled news conference where he unleashes on reporters. Role established—villain.

Out of nowhere the next scene already introduces us to the main showdown between Borg and McEnroe. All the other dozens of matches leading up to it either passed by or were shown in a blink. So much for the set-up. Feels rushed, even though the entire movie has been leading to this inevitable showdown.

Onto the game. McEnroe smokes him in the first set. Some decent back-to-back game footage. Still can’t tell if it’s actually the main actors playing or not?

Second set goes to Borg. Same for the third set. McEnroe is getting beat down in the fourth, until he gets some encouragement from Borg during the break. McEnroe comes out on fire. Falls behind. Makes a comeback. Ties it up. Kuds to the sound mixing here. Some good tension music, one fitting of a crime thriller.

They are forced into a tiebreaker game. Winner takes all. It comes down to the final match point for Borg to win. They really zoomed by the game scores and bring you to that final serve. Every time Borg takes the lead and is about to close it out, McEnroe ties him. It goes back-and-forth like this. Must have been a compelling match to watch in real-time.

Seven times Borg has a chance to close it and he can’t. McEnroe finally does it. Wait so there is more? The sets are tied at two. Yet another grueling game coming up. We’ve had over 15 minutes of this game getting screen time.

In this final game, every swing is in slow motion with an added flashback. There has been a lifetime worth of flashbacks in this movie. After another nail biter, Borg finally manages to squeeze out a win. That’s pretty surprising. In movie terms I expected McEnroe to win. I wasn’t familiar with the story so the outcome would have been an unknown surprise either way.

McEnroe didn’t win the showdown, but he won the respect and admiration of the people. Is that the moral? Even McEnroe himself wouldn’t be satisfied with.

After the game Borg celebrates by having some of the cake with his face printed on it. You know, the kinda cakes kids get with Elmo on them or some cartoon character. In this case it’s of a cyborg with no expression or emotion. Enjoy indulging in that vanilla cake.

Whether it was the cake or not, Borg looks depressed sitting at his afterparty. This guy just can’t be satisfied with anything. What a self-induced misery of a life to have. His angel girlfriend leaves the reception and he follows her. Shockingly he decides to leave the party itself. For once he makes a big boy decision. Congrats, you’re a grown ass man, making your first decision. The independence he’s showing is remarkable.

At the airport Borg and McEnroe come face-to-face. They congratulate another and share an awkward hug. It’s the first time in the movie there is a definitive sense that Borg is the older veteran and McEnroe is the young pup.

A follow-up reveals that a year later McEnroe defeated Borg in the Wimbledon final. That same year, Borg retired. At the ripe age of 26. Never mind the wasted few sentences above. They probably weren’t many years apart after all.

There apparently is a message here after all. It’s revealed that they became friends later in life and Borg was the best man at McEnroe’s wedding. I wanna know if that sweet angel girlfriend of Borg’s actually stuck around with him to end up getting married?

Pictures of the actual event and of McEnroe and Borg are shown. Looks like Borg did get married, as evidenced by one of these pictures. Gudnason has a striking resemblance to Borg. Could have easily been brothers by the looks of it. LaBeouf and McEnroe do resemble another a lot also. Good casting all around.

It’s hard to distinguish the hero and villain of this film? Both aren’t terribly unlikeable or likable characters. So the film is kinda drawn out. Easily could have shed 20 minutes. The set-up is long and then just jumps into the match. There are no significant encounters between the two men prior to the match, as they only creep on each other from a distance.

The individual stories are told in a parallel form. Way too much focus and flashbacks to the childhood and teenage years. It doesn’t need to be constantly reinforced that they had an obsession with being a tennis greats. I get it after the second flashback, but 20 more followed. 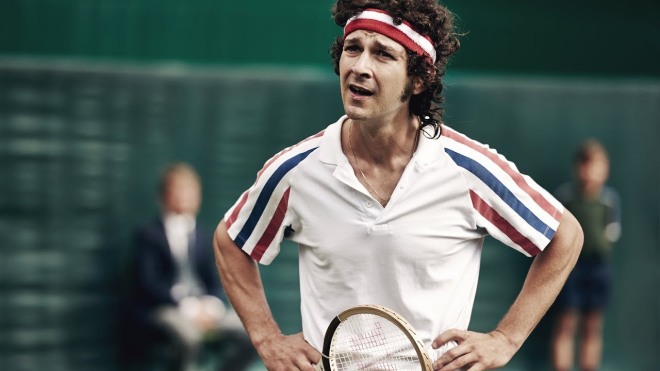 The scene with the big game was fairly compelling. It’s rushed through some sets, but it had to be. The ending flaw of this movie is not bringing these characters face-to-face earlier on, even if it was for a brief tease. There were interesting parts about this film. You had two important figures in the world of tennis at the forefront. A depiction of the lead-up to the epic 1980 Wimbledon final. Good believable acting. It was an okay movie overall. Could have done things to improve it, but it’s still worth checking out, especially if you’re a tennis aficionado. I guess the story of these men wasn’t as dramatic and their life journey to get to that game.

If one thing was establishes is that both Borg and McEnroe were manic and obsessed with success. They were perfectionists to a fault. They were the same person, just showed their inner turmoil in complete opposite ways. McEnroe was the vocal one that showed all sort of emotion, while Borg was a silent ticking bomb, who didn’t even flinch or show a ounce of emotion. Two contrasting approaches, but the same drive and passion.

(Solid performances and story, but drawn out and gets dull with the presentation of it)