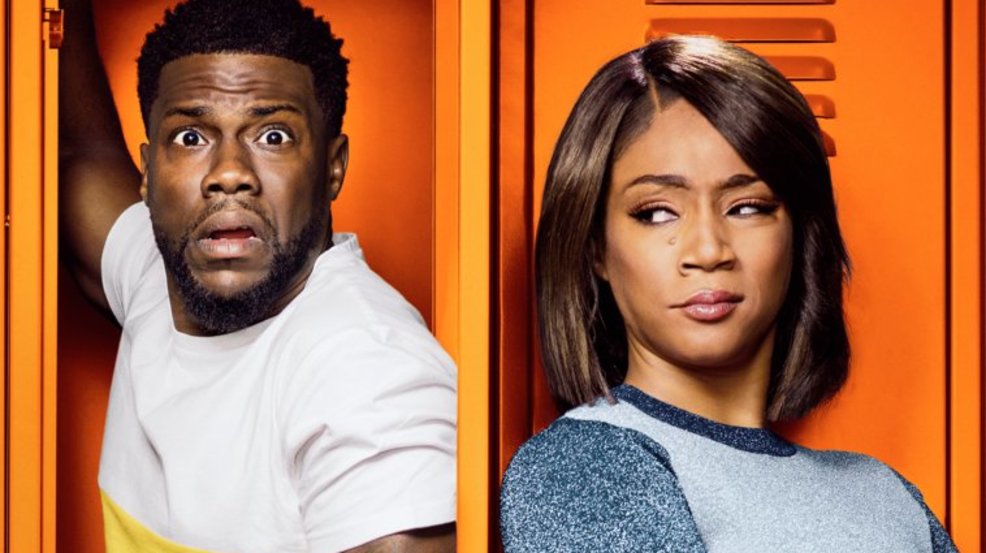 Seems like Kevin Hart is in every movie these days. He’s giving The Rock and Nicolas Cage a run for their money. With another Hart movie hitting theaters this weekend (The Upside), here is a look at a recently released Nigh School (available now on Blu-ray/DVD/Digital).

Hart plays a guy named Teddy Walker. A fairly successful salesman who finds himself without a job after accidentally blowing up the building of his employment. He’s forced to attend night school to get his GED, and that’s where thing get crazy. Think The Breakfast Club on steroids. Walker and the gang of misfits come together in their attempt to get their degree to move forward in life.

You know what you’re getting with a Kevin Hart movie and performance. Outrageous, over-the-top slapstick comedy. Hart isn’t the only one leading the charge here. Enter Tiffany Haddish, who plays Hart’s night school teacher. Those two combined deliver all the laughter you need, but the supporting cast contributes also. Rob Riggle, Romany Malco, Mary Lynn Rajskub and Fat Joe (yes, him) play fellow night school attendees, each with a unique peculiar personality and problem in their lives.

If you like Hart’s movies, then there is no reason not to enjoy this one. Haddish and Hart’s are two of the hotter comedic all-stars on the scene, so they deliver Most scenes have something to offer that will make you at least chuckle, but keep an eye out for the school break-in scene, it’s one of the highlight points in the movie. Some misses with dialogue along the way that make it overly corny and the comedy doesn’t come through.

SHOULD YOU CHECK IT OUT:

Sure. It’s definitely worth a watch and will provide you with some laughs and a good time. The film has its raunchy moments and a sweet overall message. The characters are enjoyable and flaws fairly endearing. It’s a solid, not a spectacular comedy. It’s one you can enjoy with your friends or date, but likely won’t remember it much a few days later, since there isn’t much to there to resonate.

If you are opting for the Blu-ray, you’ll get a good amount of bonus content that would make it worth your time and money. Here are some of the bonus features:

As you can see, lots of bonus content. If you enjoy the movie, you’ll certainly be interested in the bonus content. It’s a good variety. Not even sure there could have been any more content available from the one included.

Next post Contest: Enter For A Chance To Win A Free Copy of ‘First Man’