WTF! WTF was I thinking when I decided to see Suspiria? The bizarro horror remake of Dario Argento’s 1977 film of the same name, makes you wonder why there was a 1977 version of it in the first place. Time for an unkind breakdown of this disaster.

An American girl moves to Berlin to try out for a world famous dance company. The setting of the story takes place in late 1970’s. It’s split up into six chapters, none of which end up impressing. Dakota Johnson plays Susie, the American dancer who is at the center of the plot, as she starts a chain of reactions that end up badly for many characters. On the surface, the story is about a ballet dance troupe, but it’s surrounded by sinister occurrences throughout.

Johnson plays the lead character and I’m still wondering what in the hell was she thinking by taking on this role and doing this film? Johnson hasn’t shied away from indies after her mainstream success and fame she’s gained through the Fifty Shades films. Suspiria is a reach though, even when she delivers a fairly believable performance. 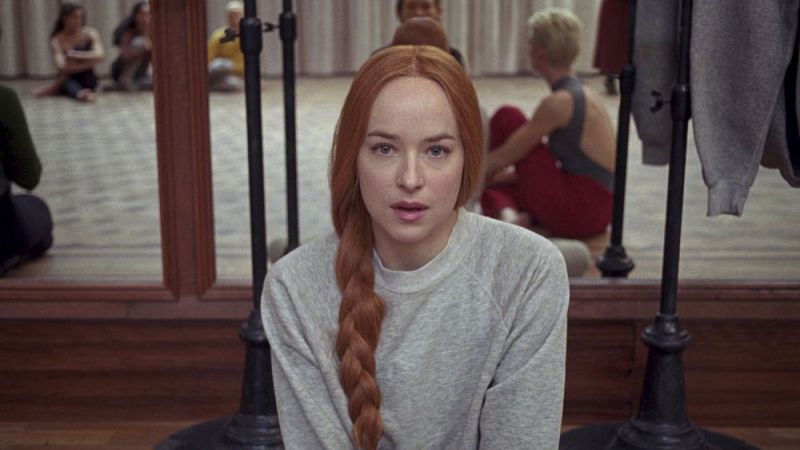 On the other hand, Tilda Swinton fits right into this movie. If she’s known for anything, it would be for wasting her talents on oddball movies with eccentric characters that she seems drawn with.

Aside from a minor appearance by Chloë Grace Moretz, the remainder of the cast features lesser known European actors.

The look of it certainly would resemble that of Germany and the time period. From the buildings to the cobblestone streets, it certainly looks and feels like Berlin. Acclaimed film director Luca Guadagnino mixes some interesting color schemes and filters. He has a cool red filter in one of the climatic scenes that gives it a hellish ambiance that’s fitting to the scene.

The music is fairly fitting to the theme and scenes. The end credits song is a worth pulling out your Sound Hound for, if you decide to stick around for it.

I did get a a few quick naps during the middle portions, so at least it helped me catch up on some sleep. The movie is so long and unnecessarily drawn out that it’s hard to stay with it. At times it has a curious element or two about it, but too often it seems like a repetition of previous scenes. There is only so much of ballet practice and performance you can watch without snoozing. The ending is so convoluted that it manages to garner some interest just through the sheer nature of the strangeness of it.

The movie sprinkles some action, but too often nothing appears to happen and scenes become stale. When the non-repetitive action takes place (rare), it’s so grotesque and gruesome that you can’t help but to look away, unless you plan on gauging your eyes out. In that case you might want to stare. They did go for an Exorcist look with their attempt to creep you out by having the characters die off by morphing and twisting themselves into a pretzel as their limbs and bones pop out in disgust.

If you have a thing for the perverse and grotesque stuff, then this could be the movie to see. It’s just hard to watch. Either you’re being bored to death, confused or witnessing some disturbing images that you don’t want planted in your mind. None of which were a bit least appealing to me. This is a very strange movie with a good amount of open-ended interpretations as to what you’re actually watching. Initially, the story concept is straightforward with the new girl trying to fit in with her dance troupe, until it starts spiraling out of control and loses all sense of sanity.

I actually found this movie to be so uncomfortable that it genuinely started to freak me out and mess with my mind. The final chapter goes all-in on this madness. Suspiria makes Vanilla Sky and Eyes Wide Shut seem easy to comprehend like Sesame Street. It feels like this movie is bipolar and can’t decide to be an artsy horror or a twisted fantasy.

Overall, Suspiria fails to impress or be enjoyable. It’s dull, twisted (not in a good way), gross and confusing. The runtime of over two hours and thirty minutes is baffling. Guadagnino and screenwriter David Kajganich put you at their mercy and make you suffer through it at least an hour longer than they should. At least the search for the worst movie of 2018 came to a stop. Nearly took me an entire year, but Suspiria reigns supreme.

RELEASE DATE: Out now in theaters